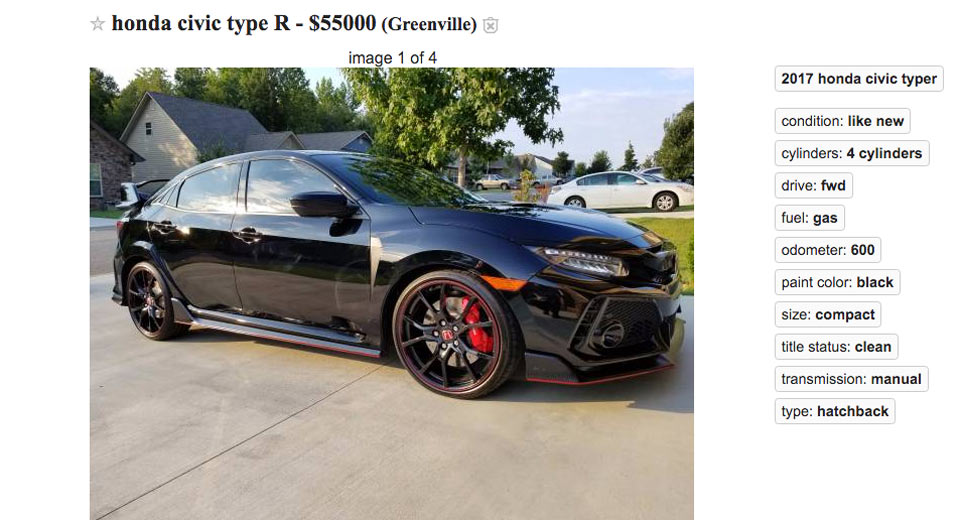 Thanks to huge demand for the Honda Civic Type R in the U.S., both dealerships and customers alike are looking to make a quick buck off the potent hot hatch.

In this latest instance, the owner of a black Civic Type R recently took to Craigslist to list their Type R for sale at a frankly ridiculous $55,000, The Drive reports.

While the listing has since been removed, such an asking price is $21,000 more than the MSRP of the Honda CTR and the car itself has 600 miles under its belt. The price is absurd but the car itself looks very nice, particularly thanks to the various red accents contrasting the black paint scheme. However, the orange side markers required for U.S. compliance are particularly ugly.

In June, we reported that a number of U.S. dealerships were charging up to $30,000 over the Type R’s sticker price due to the sky-high demand for the hatch. For the most part however, these vehicles are only being listed for so much because dealers are looking to make money on those Honda enthusiasts too impatient to wait months to take delivery of a newly-ordered example.

The private seller of this ad may have removed it due to the negative press it received or because the car was sold but whatever the case is, we don’t expect it to be the last used Civic Type R listed for sale at a significant premium.