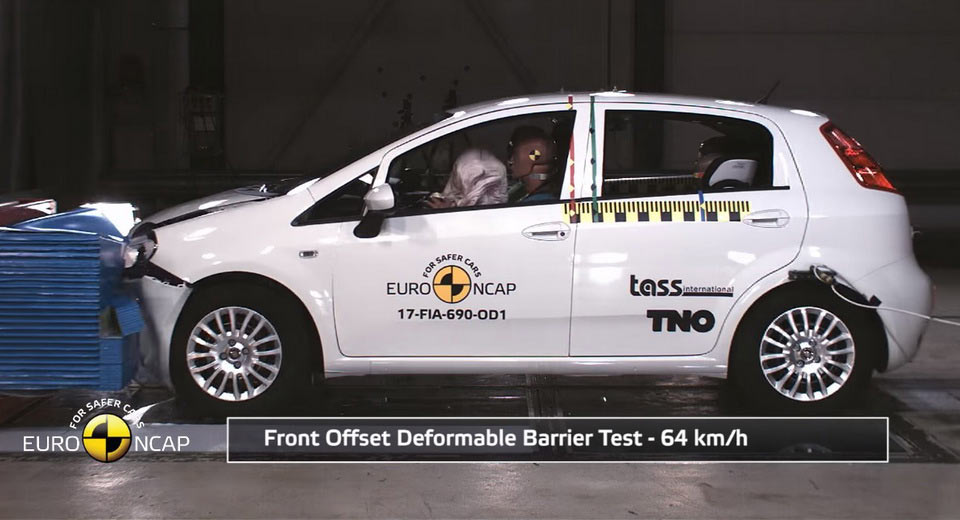 The Fiat Punto became the first model to receive a disappointing zero-star safety rating by Euro-NCAP.

The ageing Italian supermini has been on sale since 2005 and the new results reveal that it’s outclassed by every car tested in recent history, making it Euro NCAP’s first car ever to be awarded with zero stars.

The Fiat Punto managed to score two stars in adult and child occupant safety and pedestrian protection but the lack of driver assistance and crash avoidance systems brought its total score to zero.

“This is perhaps the strongest example of a manufacturer continuing to sell a product that is well past its best-before date, at the expense of the unsuspecting car buyer. We would urge consumers to check our website for the latest ratings and to choose cars with the most up-to-date five-star ratings, many examples of which we have seen in 2017”, Euro NCAP Secretary General, Michiel van Ratingen said.

The European New Car Assessment Programme updated the ratings of several recently facelifted models to allow consumers making a fair comparison to new cars. These included the Toyota Yaris, the Toyota Aygo, the Alfa Romeo Giulietta, the Ford C-Max and Grand C-Max, the Opel Karl, the DS3 and the Fiat Punto.

With the exception of the Toyota Yaris which kept its five-star rating, most of the other models dropped to three stars in this year’s safety tests. The Toyota Aygo scored four stars with the optional safety equipment.

The safety organization also tested new models, awarding five stars to the Hyundai Kona, the Kia Stinger, the new BMW 6-Series and the Jaguar F-Pace. Three stars were awarded to the MG ZS SUV, the second-gen Dacia Duster and the Kia Stonic, which scores five stars when fitted with the optional safety equipment.