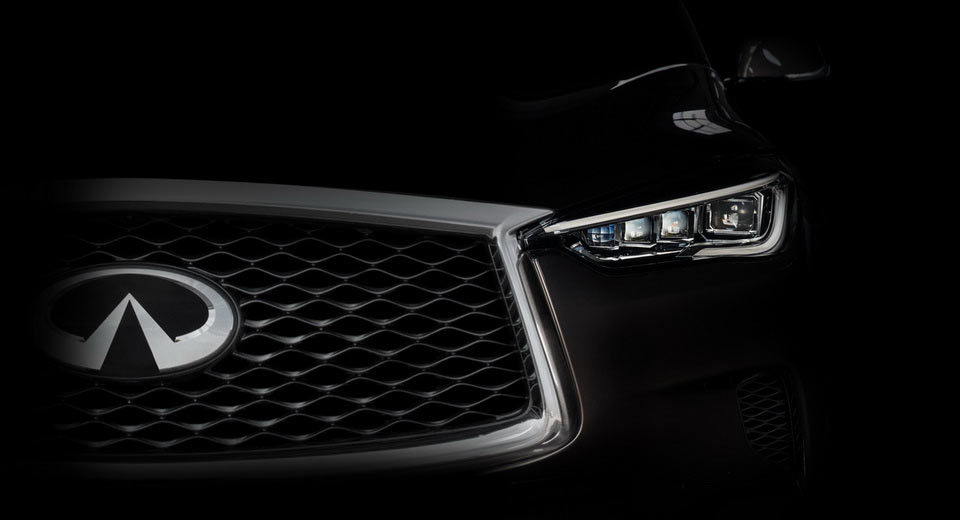 Infiniti is gearing up for the big debut of the all-new 2019 QX50 at the LA Auto Show, dropping at the same time the first teaser image ahead of the November 28 reveal event.

The released picture shows a front end with similar design cues of the recently revealed 2018 QX80 but the new QX50 is expected to feature a more sculptural and dynamic shape.

The biggest news however are expected to come from under the bonnet as the new QX50 is reportedly going to become Infiniti�s first model to use their new petrol engine with variable compression technology.

The engine itself will be a 2.0-liter four-cylinder turbocharged unit with 268hp and 288lb-ft (390Nm) of torque and will feature an electrically controlled actuator and a unique "elliptic device" called a multilink, enabling it to adjust its compression ratio from 8:1 to 14:1.

Infiniti expects the new QX50 to be 27 percent more fuel efficient with the new engine, compared to the outgoing 325hp 3.7-liter V6-equipped model. A CVT is expected to be the only transmission option.

�As with all INFINITIs, we have been inspired by our desire to drive, expressed with power and artistry,� said Alfonso Albaisa, Senior Vice President of Nissan�s Global Design. �With this all-new model, inspiration comes from striking the perfect balance between lust and logic. At a glance, seamless and sculptural, getting closer to the car reveals an ingenious blend of proportion and space.�

Stay tuned for more on the all-new Infiniti QX50 in the next few days.