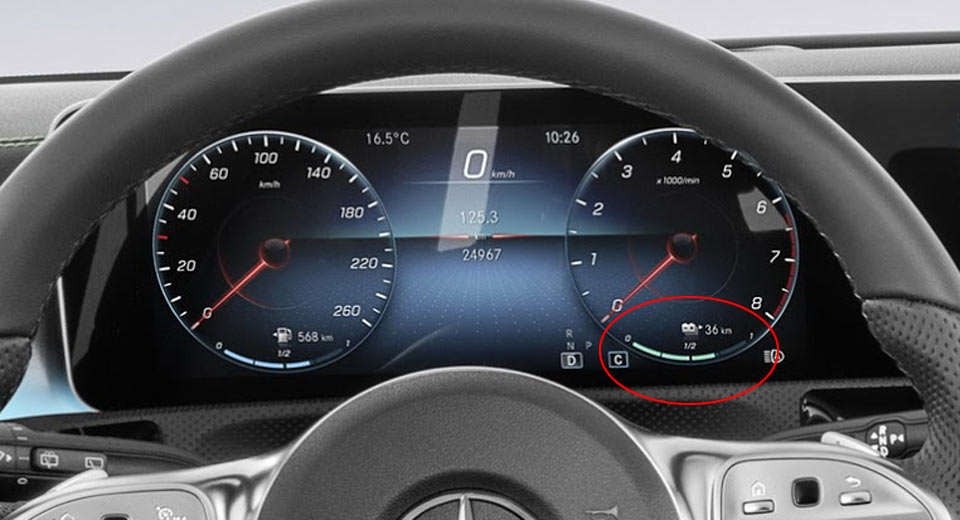 Following the release of images showing off the interior of the 2018 Mercedes-Benz A-Class, keen-eyed observers online have noticed something we initially didn’t: one of the A-Class models pictured appears to be a hybrid.

If you look beyond the eye-catching three-spoke steering wheel, air vents and ambient lighting, you may notice an interesting read-out on the digital instrument cluster.

In the same dial as the rev counter, there is a small gauge with a battery symbol and a display stating the range and how much power remains in the battery.

In the press photos published by Mercedes-Benz, the range sits at 36 km but approximately 25 per cent of the battery’s power appears to have been drained. With the battery fully-charged, that should result in a 50 km (31 mile) range.

We’ve known for quite some time that the next-generation A-Class would get some form of electrification, most likely through a 48V electrical system. However, up until now, it hasn’t been known if the plug-in hybrid model would offer all-electric driving, yet these images seem to suggest it will. For a vehicle of this sort, a 50-km range is quite impressive.

Expect to see the all-new A-Class hatchback premiere at March’s Geneva Motor Show. Shortly after, Mercedes-Benz will introduce the A-Class Sedan in regular and long-wheelbase guises.