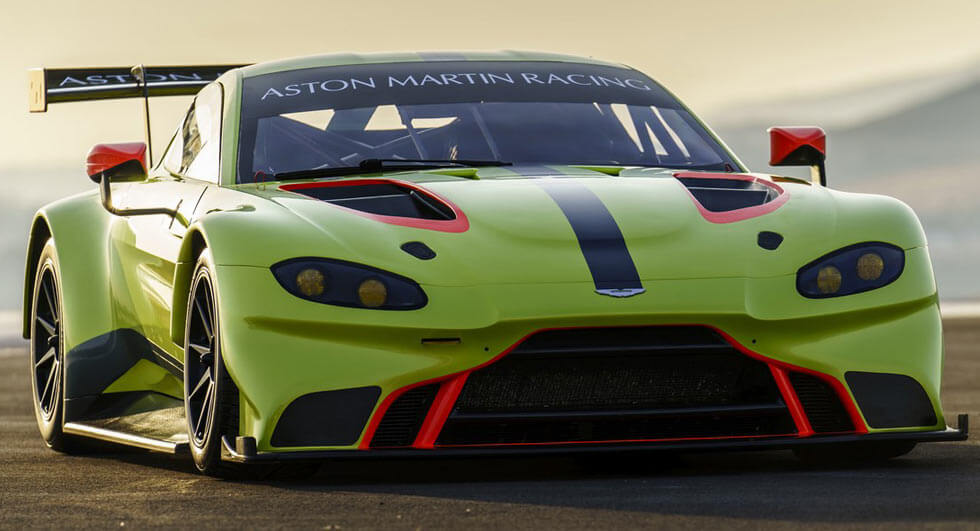 Following the unveiling of the Vantage earlier this morning, Aston Martin Racing has taken the wraps off the new Vantage GTE.

Developed alongside the road-going model, the Vantage GTE is a purpose-built race car which will compete in the FIA World Endurance Championship. The model has been designed for the GTE class and Aston Martin Racing has already logged more than 13,000 km (8,077 miles) during its development including a successful 30-hour run at the Spanish circuit of Navarra.

Aston Martin was tight-lipped about technical specifications but the car has been equipped with a front splitter, a ventilated hood, and a side-exiting exhaust system. The car also features lightweight windows, aerodynamic mirrors, and racing wheels. Other notable changes include the addition of a rear wing and a massive diffuser.

While the company was coy on specifics, they confirmed the model has a Mercedes-AMG sourced V8 engine. There's no word on the engine's output but Aston Martin Racing said "factory drivers have worked hard to optimize the drivability and performance" of the mill.

Elsewhere, the Vantage GTE has been equipped with an ?hlins suspension and Alcon brakes. The model also features bespoke racing tires that were developed by Michelin.

The car will be driven by an assortment of "highly experienced and successful" drivers including Darren Turner, Jonny Adam, Nicki Thiim, Marco S?rensen, and Alex Lynn.

According to Aston Martin Racing President David King, �Motorsport is fundamental to the DNA of Aston Martin and our commitment to the FIA World Endurance Championship is stronger than ever." He added, "This is a golden era for GT racing and today�s launch of the new Vantage GTE wil ensure that Aston Martin Racing remains at the forefront of the world�s greatest endurance series."