Did Bentley Just Reveal A New Mulsanne Convertible In Dubai? 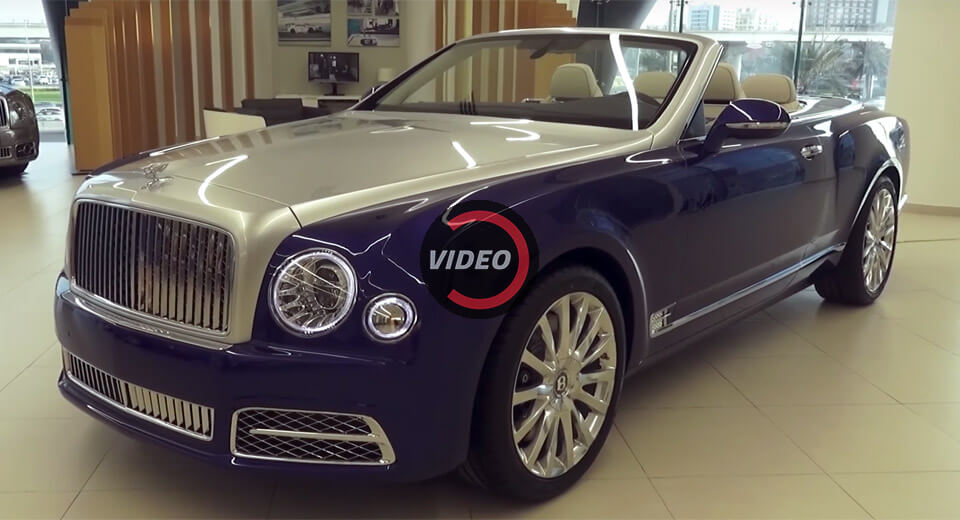 Ever since Bentley discontinued the Azure in 2010, we've been wondering if and when it would build a replacement. Now it appears that successor has been quietly unveiled in the Emirates.

We have no official information to draw on, but supercar videographer extraordinaire Shmee150 visited the marque's flagship showroom in Dubai for an exclusive look at the new convertible Mulsanne.

As you may recall, Bentley revealed just such a concept to a select few at Pebble Beach several years ago. Now apparently approved for limited production, the Grand Convertible by Mulliner will be very expensive and highly exclusive. Shmee reports only 19 examples will be built, each priced at around of $3.5 million.

That's a whole lot of dough, to be sure, but may be the only option in this particular class now that Rolls-Royce has discontinued the Phantom Drophead Coupe (offering only the smaller Dawn that's closer in size to Bentley's Continental GT).

That production number, incidentally, is anything but random. It refers to 1919: the year in which Bentley was founded. The first examples are slated to be delivered upon the marque's centenary in 2019 (with the remaining examples to follow the next year). This will, after all, be a painstakingly hand-crafted model, coachbuilt by the Mulliner division.

It's based on the Mulsanne Speed, which means it packs a 6.75-liter twin-turbo V8 good for 530 horsepower and 811 lb-ft of torque � along with all the bells and whistles that accompany that top spec.

Aside from the replacement of the four doors with two and the hard roof with a collapsible one, the Grand Convertible has been shorted by some 10 centimeters (or roughly four inches), taken out of the wheelbase. That'd make it a good foot shorter than the Extended Wheelbase model � to say nothing of the Grand Limousine version that was also crafted by Mulliner, stretched an extra 39 inches to fit an extra pair of seats in the back.

This particular example on display in Dubai is done up in Moroccan Blue and Frosted Silver (just like the Grand Limousine debut model) with a linen-colored leather interior. It also features what Shmee says is the largest single piece of wood veneer used in the industry, serving as a deck under which the fabric roof is stowed.