GMC Sierra Desert Fox Resurfaces Among The Dunes Of Dubai 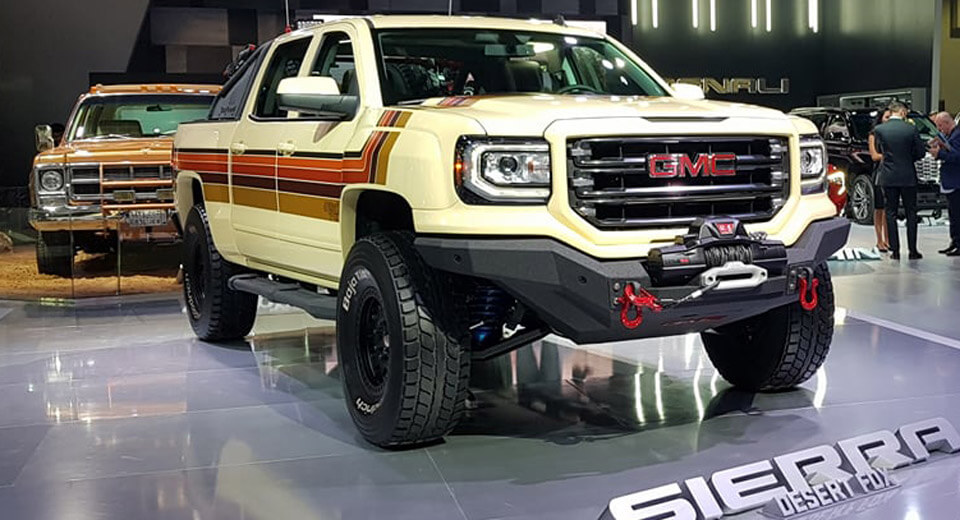 All sorts of outlandish things happen among the sands of Dubai. We don't always hear about them, but this one has blipped on our radar.

It's the GMC Sierra Desert Fox, a concept truck showcased at the Dubai Motor Show. It's sort of like a Ram Rebel or Toyota Tundra TRD Pro, but with a heavy dose of retro thrown in.

The truck harkens back not to the Nazi general Erwin Rommel (who was known by that nickname) but to the Desert Fox editions that GMC offered in the 1970s, like the vintage Jimmy shown alongside the concept.

That throwback treatment comes down principally to the earth-tone stripes on the beige bodywork, but the rest of it is all hardcore off-roader.

Though official details are even more scarce than official photos, but you can't miss the chunky tires, bead-lock wheels, jacked-up suspension, low-profile bumpers, nose-mounted winch, side steps, skid plates, custom exhaust, spare tires and jerrycans in the bed, and sports bar with auxiliary LEDs. It even has a pair of hazard flags extending way up high from the roof, all the better to see roaming the dunes of the Arabian peninsula.