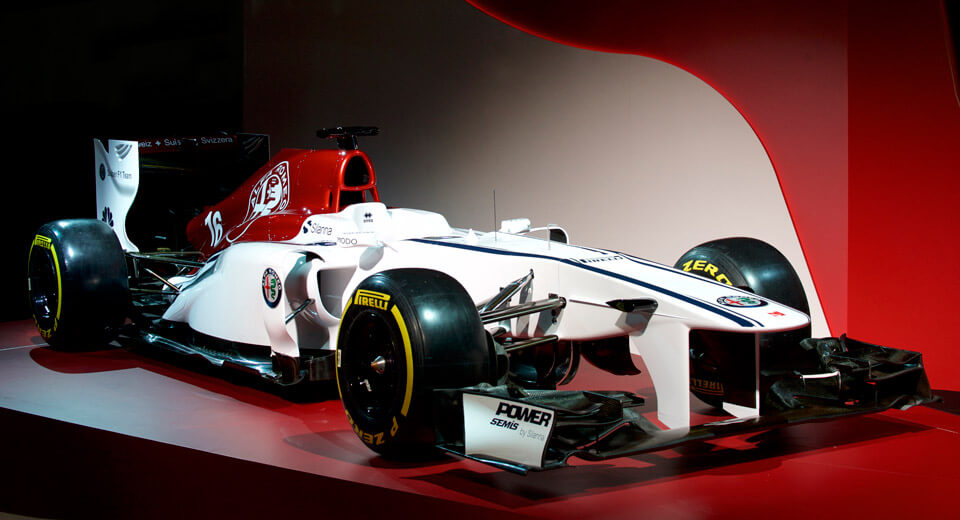 Alfa Romeo and Sauber are opening new chapters in their respective histories as they embark upon a new Formula One collaboration starting next season.

That partnership got off to a good start this weekend at the Museo Storico Alfa Romeo outside Milan where the team revealed both its new livery and its driver lineup for next season.

The color scheme, as you can see, is primarily white at the nose and sidepods, and red at the upper air intake and engine cover. The prominence of the Alfa Romeo emblems marks not only the first time that the Italian marque will be represented (beyond some small logos on Ferrari's cars) for the first time in over 30 years, but the welcome arrival of a primary sponsor for the Swiss team that's been struggling since parting with BMW.

Driving for the newly rechristened team will be Marcus Ericsson and Charles Leclerc. Ericsson has been with Sauber since 2015 (when he joined from the now defunct Caterham outfit) and was believed to be the team's choice for next season. Leclerc is a Ferrari prodigy fresh from securing the title in the FIA Formula 2 Championship, the series formerly known as GP2 with past champs including Nico Rosberg, Lewis Hamilton, McLaren driver Stoffel Vandoorne, and Toro Rosso's Pierre Gasly.

Leclerc is also no stranger to the Sauber team, having test-driven for it six times this past season (and Haas several times the one before that). His role as the team's primary test driver will be taken next year by Antonio Giovinazzi, another Ferrari prodigy who contested two races for Sauber in 2017 and was a test driver for both Haas and Ferrari.

The question is whether the talent and the financial support will help Sauber find its way back up the pack. From the second- and third-place finishes it achieved a decade ago, the team has fallen to 10th place in the standings these past two season, which for 2017 equals dead last since Manor dropped out.