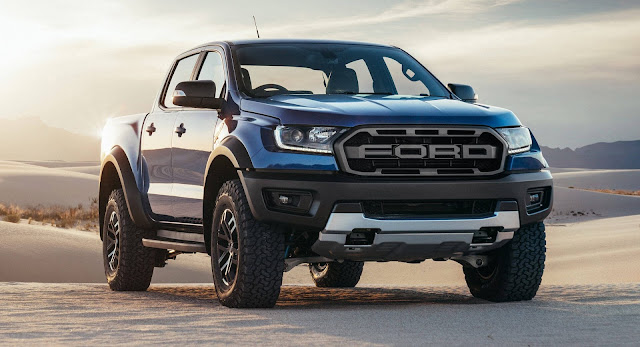 Say hello to the new Ford Ranger Raptor, an off-road-ready version of the pickup truck that slots under the popular F-150 Raptor.

“The Ford Performance team is excited to extend the Raptor name from our flagship off-road performance F-150 to Ranger,” said Jamal Hameedi, chief engineer, Ford Performance. “Just like the F-150 Raptor, the Ranger Raptor builds upon the core capability of the range of vehicles it comes from and carries the unmistakable Ford Performance DNA appearance.”

Powering the Ford Ranger Raptor is a new 2.0-liter twin-turbo four-cylinder diesel engine. It develops 210hp (213PS) and 369lb-ft (500Nm) of torque, pushed to the all-wheel drive system through a 10-speed automatic gearbox that’s co-developed by Ford and GM.

The front bumper system is frame-mounted in order to offer more durability while it incorporates new LED fog lamps with functional air-curtain ducts which reduce air resistance from the body.

Ground clearance is increased to 283mm, giving the new Ranger Raptor an approach angle of 32.5°, ramp over angle of 24°, and departure angle of 24°. Overall dimensions are 1873mm tall, 2180mm wide and 5398mm long, making it noticeably bigger from its regular Ranger siblings. Front and rear tracks measure 1710mm.

“The standout experience of the Ranger Raptor, hands down, is how far you can push it off-road versus any other available production road vehicle in our markets, and still ride like a millionaire on-road,” said Damien Ross, Chief Program Engineer, Ranger Raptor.

Additionally, the new Ford Ranger Raptor adopts the Baja driving mode from the F-150 Raptor. This optimizes throttle response, shifting, and boost control, and engages the mechanically locked 4×4 High, ensuring that the vehicle can cope with pretty much everything Mother Nature has to throw at it.

Developed mostly in Australia, with a helping hand from the brand’s US Raptor team, the Ranger Raptor will be assembled in the company’s factory in Thailand.

However we still don’t know if the Blue Oval will bring it stateside, with the company just saying that “the Ranger Raptor is set to turn heads throughout Asia Pacific and around the world”.