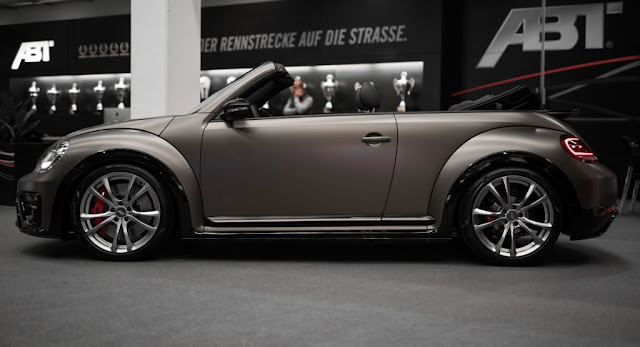 #Volkswagen isn’t offering a GTI version of the Beetle, but with a little help from a tuner like ABT the car can become a proper hot hatch.

The updated Beetle sports six-piston brake calipers and 370x35mm (14.6×1.4in) ventilated discs up front, as well as new suspension springs, which bring the car closer to the ground.

This Beetle Cabriolet has also welcomed a bronze wrap to emphasize its special stance. Moreover, it now sits on 19-inch alloy wheels with a five double-spoke pattern, in silver-bullet shade, but the color was an optional extra, as the rims are supplied in standard gun-metal or matte black.

The cabin is dominated by lots of leather with contrast stitching on just about every visible surface, from the seats to the door panels, and from the dashboard to the steering wheel. All black plastic panels have been covered in real carbon.

The project is described as being “very individual” by the tuner, which calls this Beetle a “one-of-a-kind vehicle”.
Tags : ABT, Tuning, VW, VW Beetle,
Share to: