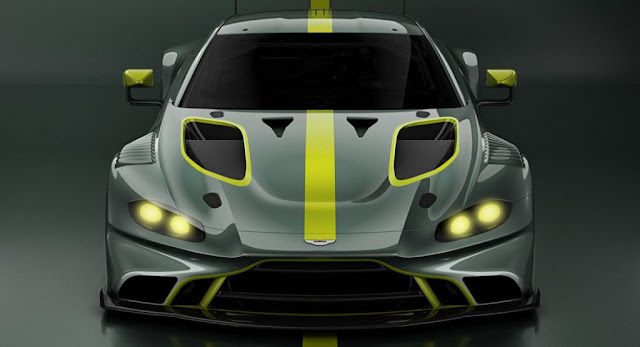 #AstonMartin has released a teaser of the all-new Vantage GT3 and GT4 racers that will be available to customer teams in 2019.

The duo of race cars replace the Aston Martin V12 Vantage GT3 and V8 Vantage GT4 currently raced in various series around the world and will complete in the likes of the WeatherTech SportsCar Championship and Blancpain GT Series.

Both the new Vantage GT3 and GT4 will use the familiar twin-turbo 4.0-liter V8 sourced from AMG of the road-going model, albeit modified to meet racing requirements.

As this teaser of the Vantage GT3 reveals, it will benefit from a range of aerodynamic changes to make them ready for the track. Some of the most obvious changes will be a low front splitter, NACA ducts on the hood, large hood air extractors, bespoke wing mirrors, front wheel arch louvers, and a huge rear wing.

Coming to a race series near you (maybe…)

The British marque will homologate the car from the March 1, 2019 and has already started accepting orders.

“We are very proud of the heritage we have established as a leading supplier of customer GT cars, with customers racing our cars all around the world,” Aston Martin Racing managing director John Gaw said.

“We told the clients who first purchased our GT3 cars seven years ago, that they would be buying a car that would be capable of winning races for years to come. This year we have already proved that with the Aston Martin V12 Vantage GT3’s successes in the British GT Championship.

“That longevity is something that separates us from other manufacturers. I expect the new GT3 and GT4 to be just as competitive as the cars they are replacing and to remain so for a similar period of time,” Gaw said.
Tags : Aston Martin, Aston Martin Vantage, Motorsport, Racing, Reports,
Share to: