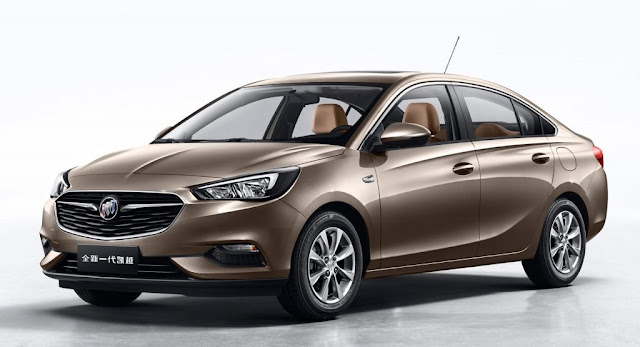 #Buick may be an American brand, but it’s doing quite well in China and the Excelle is one of its core products.

Since introducing the name plate in 2003, Buick has sold nearly 2.7 million Excelles in China. That’s almost as many as all the vehicles, across its entire lineup, that Buick has sold back home in America over the same period. Not bad for a humble little compact car.

The original Excelle was based closely on the Daewoo Lacetti, and it remained on the market until 2016.

Its place has since been taken by the Excelle XT hatchback (based on the Opel Astra) and Excelle GT sedan (based on the Verano). The Excelle GX wagon arrived just last year to supplement them.

Pictured here for the first time is the new Excelle sedan – it will take the place of the original model that was discontinued two years ago. Details are about as few as the images released, but Buick says it’s been designed “new from the ground up.”

It’ll ride on a 2,611-millimeter (103-inch) wheelbase. That’s 11 mm (0.43”) longer than the previous Excelle, but about 23 mm (0.9”) shorter than the Excelle GT. Atop that base, Buick has draped its latest design language. The new model also promises to pack “﻿many new technologies and technical standards for connectivity, driving control, fuel consumption and safety” into a “more spacious and comfortable interior.”

More than that, we couldn’t tell you at this early stage. But with yet another model in its lineup, it won’t be long before Buick will have sold 10 million vehicles in China, which is fast becoming its most vital market worldwide.
Tags : Buick, Buick Excelle, China, New Cars,
Share to: