New Audi Q8 Ready To Order, But Only With The Mild-Hybrid Diesel Option 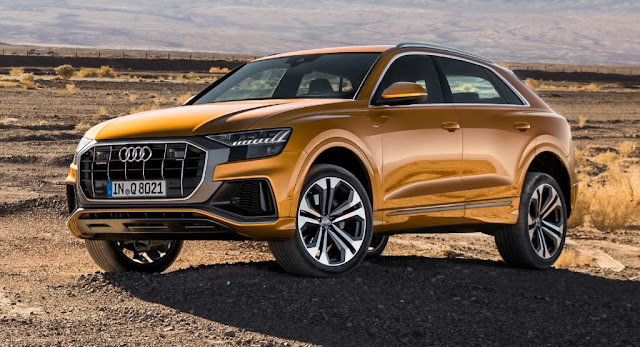 #Audi has opened the order books for the range-topping Q8, the company’s latest SUV model that aims to steal customers away from models like the BMW X6 and the Mercedes GLE Coupe.

Customers in Europe will be offered a single powertrain option from the get-go, the Q8 50 TDI, which is powered by Audi’s new mild-hybrid 3.0-liter TDI. The new diesel powertrain integrates a lithium-ion battery pack and a belt alternator starter (BAS) into a 48-volt electrical system, allowing the Q8 to coast between 55 and 160km/h (34 and 99mph respectively) with the engine switched off.

The permanent Quattro all-wheel drive features a mechanical center differential, with the torque split being rear-biased, at 40:60 between axles as standard. An optional air suspension is available, giving the Q8 a ground clearance of up to 254mm, as well as an all-wheel steering system for greater agility.

Audi’s flagship SUV also features switchable hydraulic bearings that connect the engine to the front axle’s subframe in order to eliminate vibrations, resulting in a more refined ride. Cutting-edge technologies like this one can be found throughout the new German SUV Coupe.

This includes the interior too; Audi designed the cockpit in order to need almost no buttons or knobs. The dash features two high-res touch displays, with the upper one measuring 10.1 inches in diameter and the lower one 8.6 inches in diameter. Haptic feedback is also present in order to give the operator a click-like feedback when a function is selected. A clever natural language voice control is also present, as is the 12.3-inch Audi Virtual Cockpit.