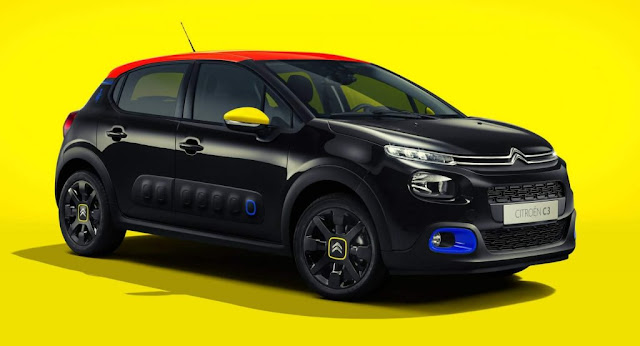 Alongside the C5 Aircross PHEV Concept, Citroën’s Paris Auto Show stand will also feature a colorful limited edition model based on the C3 supermini. Called the C3 JCC+, it was created by French designer Jean-Charles de Castelbajac who wanted to turn the hatchback into a “fashion car.”

As Citroën puts it, the C3 JCC+ combines the elegance of a black dress with Castelbajac’s signature colors: red, blue, and yellow.

The colorful treatment of the special edition model continues with the blue fog light covers and Airbump details, as well as the yellow wheel cap surrounds and mirror caps. The roof capsule features a special chevron decoration, while the rear quarter panels incorporate the Blue JCC+ monogram.

Jean-Charles de Castelbajac experimented with the same colors inside, where red, blue, and yellow accents cheer up the ambiance. The designer’s signature can be found on the sun-visor mirror in the form of a JCC+ sticker, as well as on the front mats that feature the JCC+ monogram. Finally, a numbered metal plate located at the base of the gearshift lever will attest to the vehicle’s limited edition status.

Citroën will only build 99 units of the C3 JCC+ and will sell it exclusively online via its French website. The limited edition model goes on sale in November.
Tags : Citroen, Citroen C3, Citroen Videos, New Cars, Paris Auto Show, Video,
Share to: