2020 Toyota Corolla Hybrid Sedan Arrives In LA With An Estimated 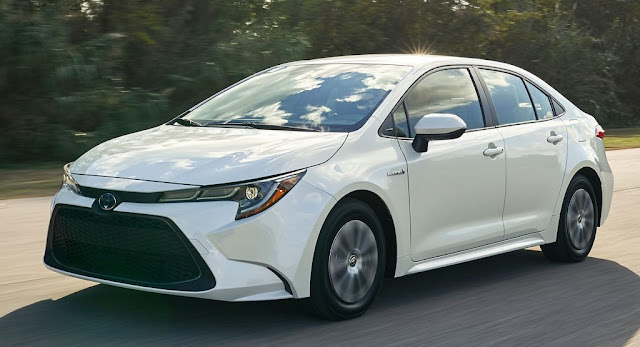 Toyota rolled out the all-new Corolla in hatchback form earlier this year, and followed up with the European wagon version in Paris, and the sedan version at the Guangzhou show in China just a couple of weeks ago. Now it’s brought the new Corolla sedan to North America for its debut at the LA Auto Show, and revealed full details of its hybrid powertrain in the process.

While the Japanese automaker will continue offering its mainstay economy sedan with conventional powertrain options, it’s also rolling it out with a hybrid for the first time. Adapted from the Prius, the powertrain combines a 1.8-liter naturally aspirated inline four with a pair of electric motors and a continuously variable transmission,

The system delivers a combined output of 121 horsepower (90 kW) and fuel economy projected at upwards of 50 miles per gallon. It also employs a new Hyper-Prime Nickel battery that sits flat under the rear seats (instead of the trunk) for a lower center of gravity and better packaging in the TNGA platform. And it incorporates a trick “preload” differential that channels torque to each of the two front wheels individually to combat the kind of “rubber-band” acceleration typical of many hybrids and provide “linear acceleration response [that] may take some by surprise.”

As you might expect, the Corolla Hybrid will feature both Normal and Eco driving modes, as well as an EV mode for pure electric motivation over short distances. But it also offers a Sport mode that increases the amount of power available for acceleration. And the regenerative braking system is designed to work with the shoes in the wheels to offer more stopping power.

The Corolla Hybrid rides on its own set of 15-inch alloys with low-rolling resistance tires, and offers all the safety and infotainment technologies you’d expect from a major automaker’s latest product. Pricing has yet to be announced for the US market, but you can expect to pay a premium for the Corolla Hybrid over the conventional version as it joins Toyota’s growing gasoline-electric lineup alongside the Prius, Prius Prime, Prius C, the Mirai fuel-cell vehicle, and hybrid versions of the Camry, Avalon, RAV4, and Highlander.
Tags : Hybrids, LA Auto Show, Toyota, Toyota Corolla,
Share to: