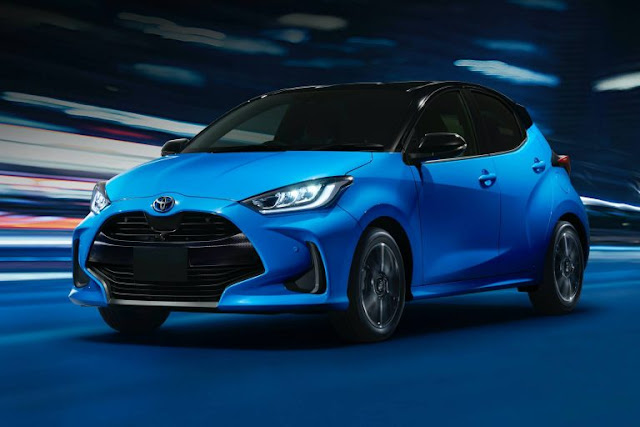 
The fourth-generation Yaris is the first application of the Toyota New Global Architecture (TNGA) in the segment, with the new modular platform being code-named the GA-B. It enables significant improvements for the small hatchback in all areas, including styling, practicality, mechanical, technology and safety, and also helps reduce the car’s weight by up to 50 kg (110 lbs).

The all-new Yaris features a much more emotional design than its predecessor, with more dramatic proportions thanks to it being shorter, wider and lower. Bucking the trend of most new cars, the 2020 Yaris loses 5 mm (0.2 in) in length and 40 mm (1.6 in) in height. However, it adds millimeters where it counts, namely the wheelbase (+50 mm / 2 in) and width (+50 mm / 2 in).

This results in a roomier interior (the seats are mounted lower so headroom is not affected) and is a prerequisite for improved driving dynamics and maneuverability. Exterior styling highlights include the large grille, bulged wheel arches, longer bonnet, sporty bumpers, and all-LED lights.

The interior design follows the same “less-is-more” principle and features high-quality materials including felt trim finish for the door panels and a soft-touch instrument panel (a first for the Yaris). Toyota says it focused on improving sensory quality in terms of touch, operation and sound of everything that passengers interact with in the car.
2020 Toyota Yaris in European specification

The dashboard is slimmer and set lower, with a wider and higher center console and a smaller steering wheel for better visibility. Information sources includes a central Toyota Touch screen, a TFT multi-information display in the instrument binnacle flanked by twin digital meters, and a 10-inch color head-up display. Other available features include a wireless charger, a heated steering wheel and ambient lighting around the driver’s cockpit.

Depending on the market, Toyota’s new supermini is available with a new 1.5-liter Hybrid Dynamic Force powertrain as well as 1.5-liter and 1.0-liter three-cylinder gasoline engines. The headline act is the fourth-generation self-charging hybrid system, which is directly derived from the larger 2.0- and 2.5-liter ones introduced in the Corolla, Camry and RAV4.
2020 Toyota Yaris 1.5L Dynamic Force Engine with Hybrid System

The system combines a 1.5-liter Dynamic Force three-cylinder Atkinson cycle gasoline engine with an 80 PS (79 HP) electric motor and a bigger and lighter lithium-ion battery. Toyota claims the new powertrain reduces the Yaris Hybrid’s fuel economy and CO2 emissions by more than 20 percent while offering a 15 percent higher system output. Since the outgoing Yaris Hybrid is rated at 100 PS (99 HP), this means that the new one should make 115 PS (113 HP).

At least in Japan, the new hybrid system is also offered with an E-Four (electric four-wheel drive) system, a first for a subcompact car. When it comes to driving, Toyota says the 2020 Yaris is more agile and stable thanks to the lighter weight, 15 mm (0.6 in) lower center of gravity, which also helps create a more engaging driving position, wider tracks and higher body rigidity.


According to its maker, the 2020 Yaris has been designed to be the world’s safest car in its segment, so it’s little surprise that it comes equipped as standard with the Toyota Safety Sense (TSS) package which includes full speed-range intelligent adaptive cruise control and lane trace assist system, plus a center airbag to protect front occupants in case of side impact.