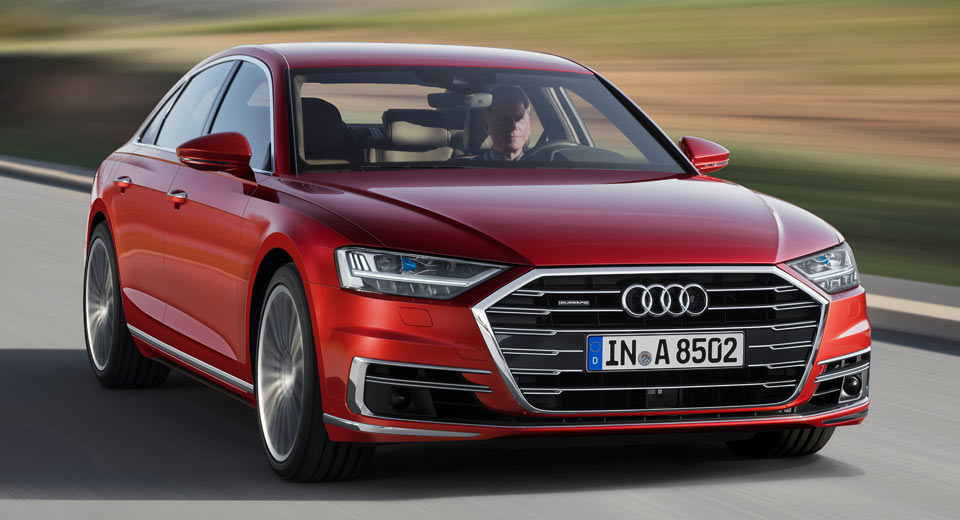 Now that Audi has released the new A8, the question on everyone's minds is when we'll see the new S8 performance version, and what will be under the hood.

We can't answer the first question just yet, but Evo has some interesting tidbits about the second. According to the British publication, the new performance sedan is set to employ Porsche power – and even a hybrid version.

Now before you go screaming “what, that's crazy,” let's establish a couple of things. For one, the previous S8 employed a 5.2-liter V10 that was essentially adapted from the Lamborghini Gallardo. The current model uses the same engine as the Bentley Continental GT. So the idea of using a Porsche engine suddenly doesn't seem quite so outlandish, especially when you consider that the new A8 shares its platform with the Panamera.

The engine deployed in the Panamera and being mooted for the S8 bears the same basic parameters as the outgoing model's: a 4.0-liter twin-turbo V8. But it's an entirely different block, and where the current S8 packs 513 hp (or 597 in Plus guise), the Panamera Turbo boasts 550 – or, crucially, 680 with an electric boost in the Turbo S E-Hybrid.

That's where things get interesting, because Evo and its sister-site Auto Express report that the S8 Plus could be replaced by an S8 E-Tron, using the Porsche's hybrid powertrain. Both versions could end up detuned slightly on their way from Zuffenhausen to Ingolstadt, but not by much.

As it is, the Panamera Turbo S E-Hybrid churns out significantly more power not only than the Mercedes S550e PHEV or BMW 740e iPerformance, but than the AMG S63 or M760i – and more torque than all but the S65.