Jeep Concept Freedom Render Is Unreal In The Most Awesome Way 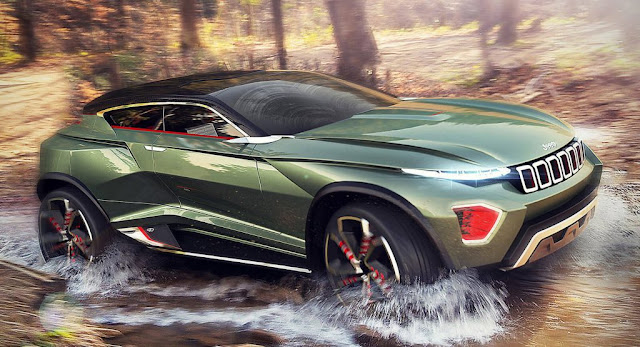 Ever notice how most designers envision future Jeeps as staying true to a more or less rugged design philosophy? Proof, if any was needed, is all the wacky Wrangler concepts and renderings we’ve seen in the past few years.


But what about the rest of the range? Not everyone wants to ride around in something that’s mostly utilitarian, and Jeep knows this all to well, which is why models like the Compass or the Grand Cherokee are more about comfort and convenience first and all the rest second.

So, if we take that notion but fast forward it 20 or 30 years into the future, who’s to say we wouldn’t come across something as dynamic and visually aggressive as this Jeep Concept Freedom designed by Antonio Paglia.

The virtual concept almost looks more like one of those futuristic Mars rovers than any current crossover. It’s all about sharp lines and angles, massive wheels, plenty of ground clearance, and, of course, style – just look at those extremely shallow windows, sloping roof and huge rear wheel arches!

While its creator does mention that this would be a fully-electric product, we would go as far as to imagine it as a fully-autonomous one as well, as the tech should be the norm in two or three decades. With that in mind, we reckon the car should probably be the one in charge of changing lanes and what not, or at least actively stop you from running into anyone else.

As for the interior, we see a large dual-screen setup, perhaps a little similar to the 2019 VW Touareg’s, a flat top and bottom three-spoke steering wheel, like you get in a Peugeot, and a floating center console, with no physical buttons in sight.
Tags : Concepts, Electric Vehicles, Galleries, Jeep, Jeep Concepts, Renderings,
Share to: