Colorado ZR2 AEV Concept Is A Rough And Tumble Off-Roader 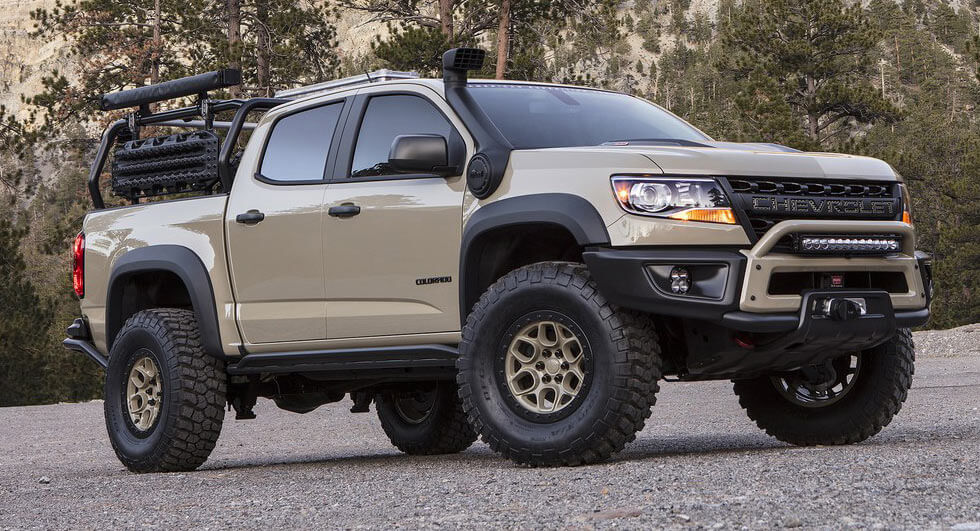 The Chevrolet Colorado ZR2 is one of the most rugged compact pickups on the market but that hasn't stopped the company from unveiling the extreme Colorado ZR2 AEV concept at SEMA.

Created in collaboration with American Expedition Vehicles, the concept has been equipped with new bumpers, underbody skid plates, and extended fender flares. The truck also boasts an expedition bed rack, a snorkel, and beadlock wheels that are wrapped in 35-inch BF Goodrich KM2 Mud-Terrain tires.

Speaking of off-road goodies, the concept has a Chevrolet Performance development suspension that includes specially-tuned Multimatic DSSV shocks, a long-travel rear leaf spring suspension, and an assortment of other upgrades.

Elsewhere, the truck has been equipped with LED auxiliary lights, an onboard air compressor, and a built-in water tank. Designers also installed a refrigerator/freezer, aluminum storage cases, and NATO-style fuel cans.

When something goes awry, drivers shouldn't have to worry as the truck has recovery shackles, a Hi-Lift jack, and a Warn winch.

The Colorado ZR2 AEV concept will be joined by the ZR2 Race Development Truck. It features a 1.5-inch body lift and a 3.6-liter V6 engine which has been outfitted with a new air intake and a performance exhaust system. Other highlights include a steel driveshaft, skid plates, and 33-inch Goodyear Wrangler MT/R tires.