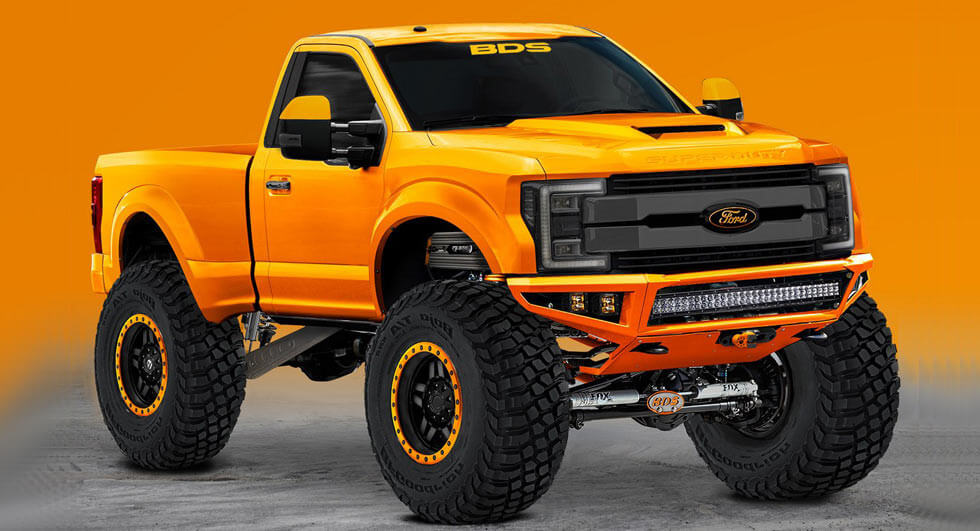 The Ford F-Series is the best selling vehicle in the United States so it comes as little surprise the automaker is showcasing eight of them at SEMA.

Kicking things off is Project SD126 from BDS Suspension. The truck is based on an F-250 Super Duty XLT Regular Cab and it is bound to draw attention as it features 42-inch tires, an off-road focused suspension, and a custom rear bed. The model has also been outfitted with a ram air hood, rugged bumpers, and a warn winch.

Power comes from a 6.7-liter V8 turbo diesel engine which boasts a cold-air intake and a Diamond Eye exhaust system. There's also an EZ-LYNK programmer which connects to a driver's smartphone. 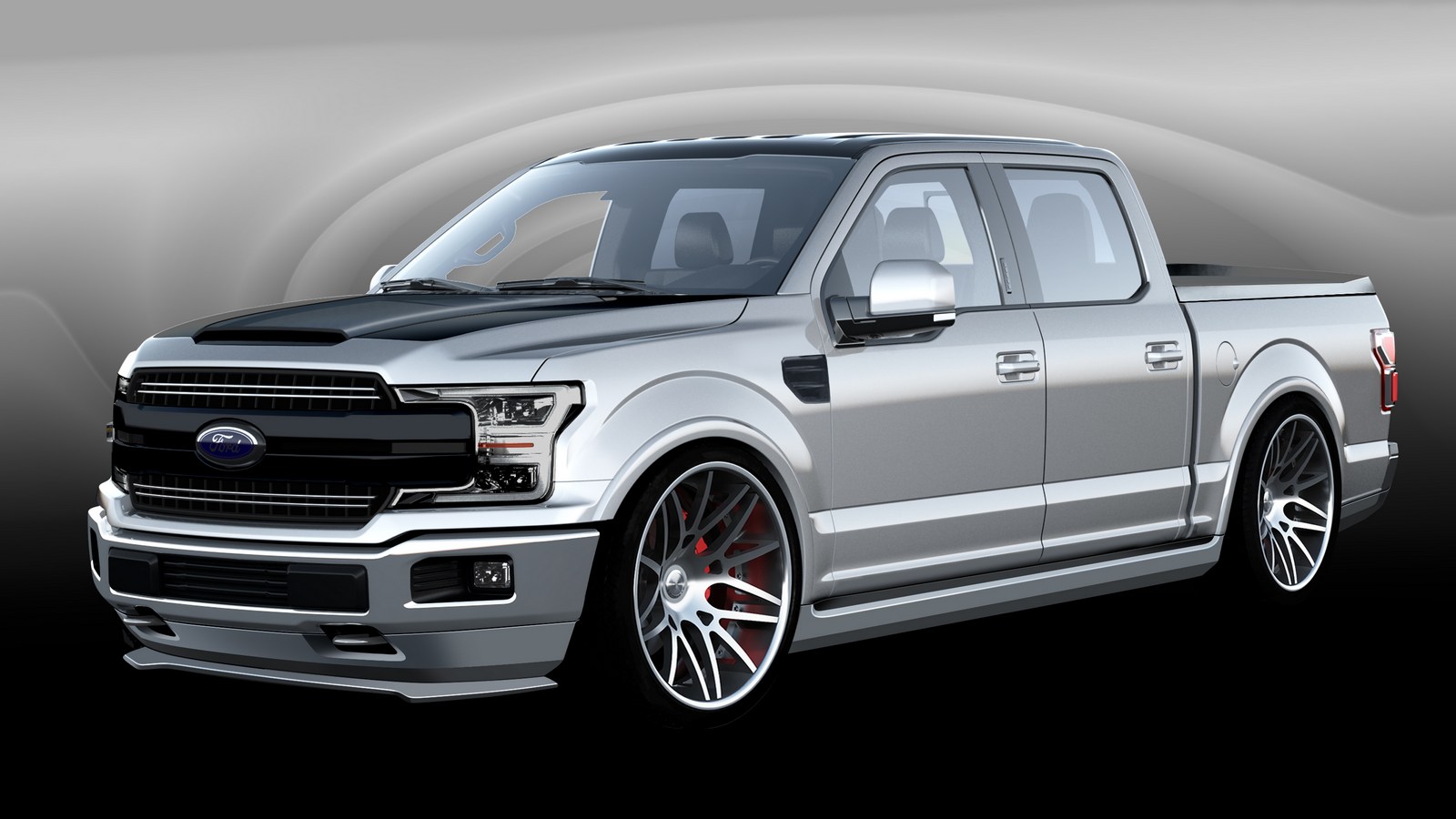 The Air Design F-150 goes in a different direction as it "recalls the sport-truck mania of the 1990s." As a result, the model has a streamlined appearance thanks a stylish body kit which includes a new front air dam, extended side skirts, and a lower rear skirt. Other changes include front fender vents, a hood scoop, a tonneau cover, and Forgiato Fratello ECL wheels. 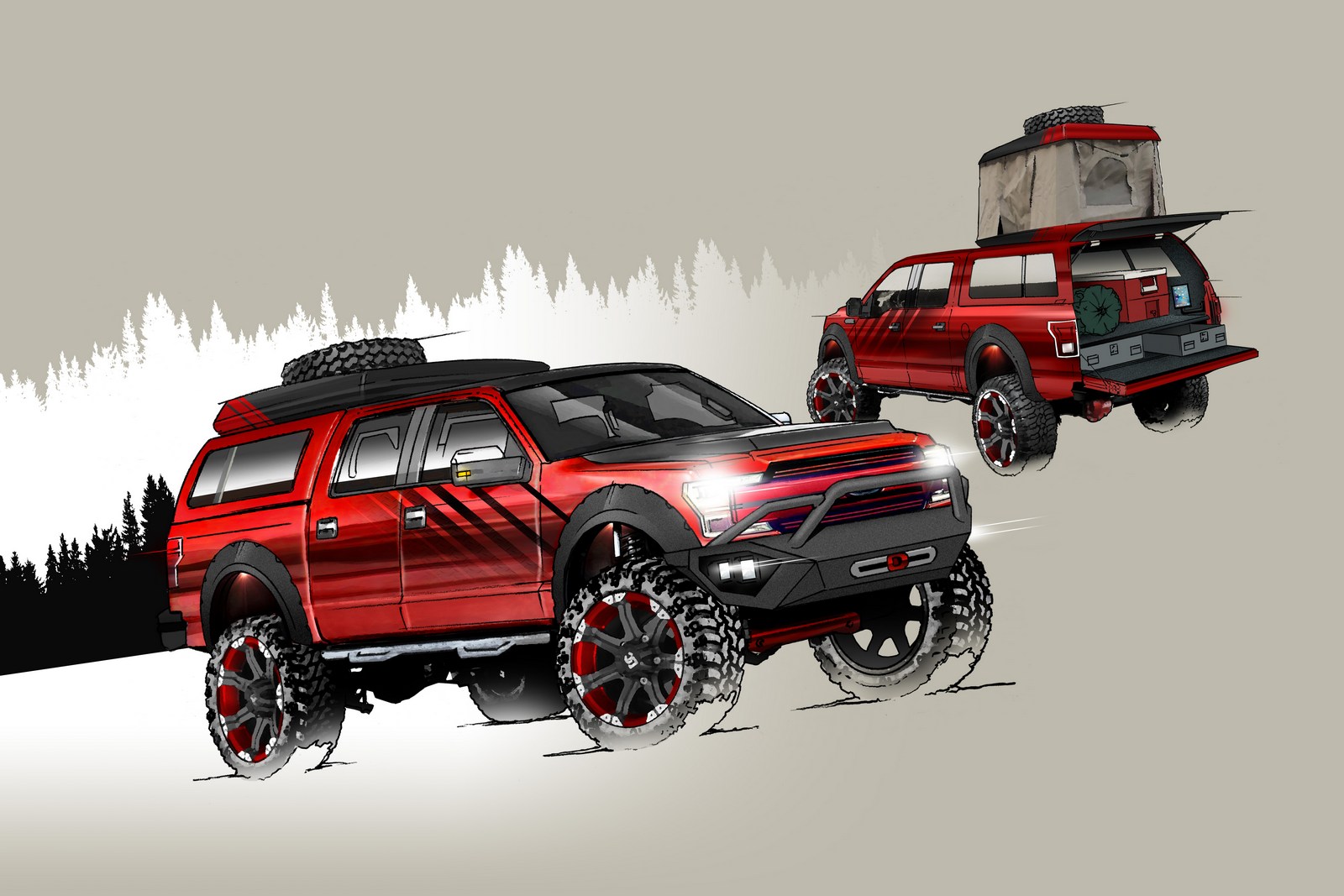 The Modern Adventurer F-150 is designed for the outdoors and it features extended fender flares, a Skyjacker suspension, and Fuel Stroke wheels with off-road tires. The truck also comes equipped with an A.R.E. Z Revo cap, N-Fab bumpers, and a new hood.

Motivation is provided by a 2.7-liter EcoBoost V6 engine which has Corsa air intake and a cat-back exhaust system. It is connected to a ten-speed automatic transmission which sends power to a four-wheel drive system. 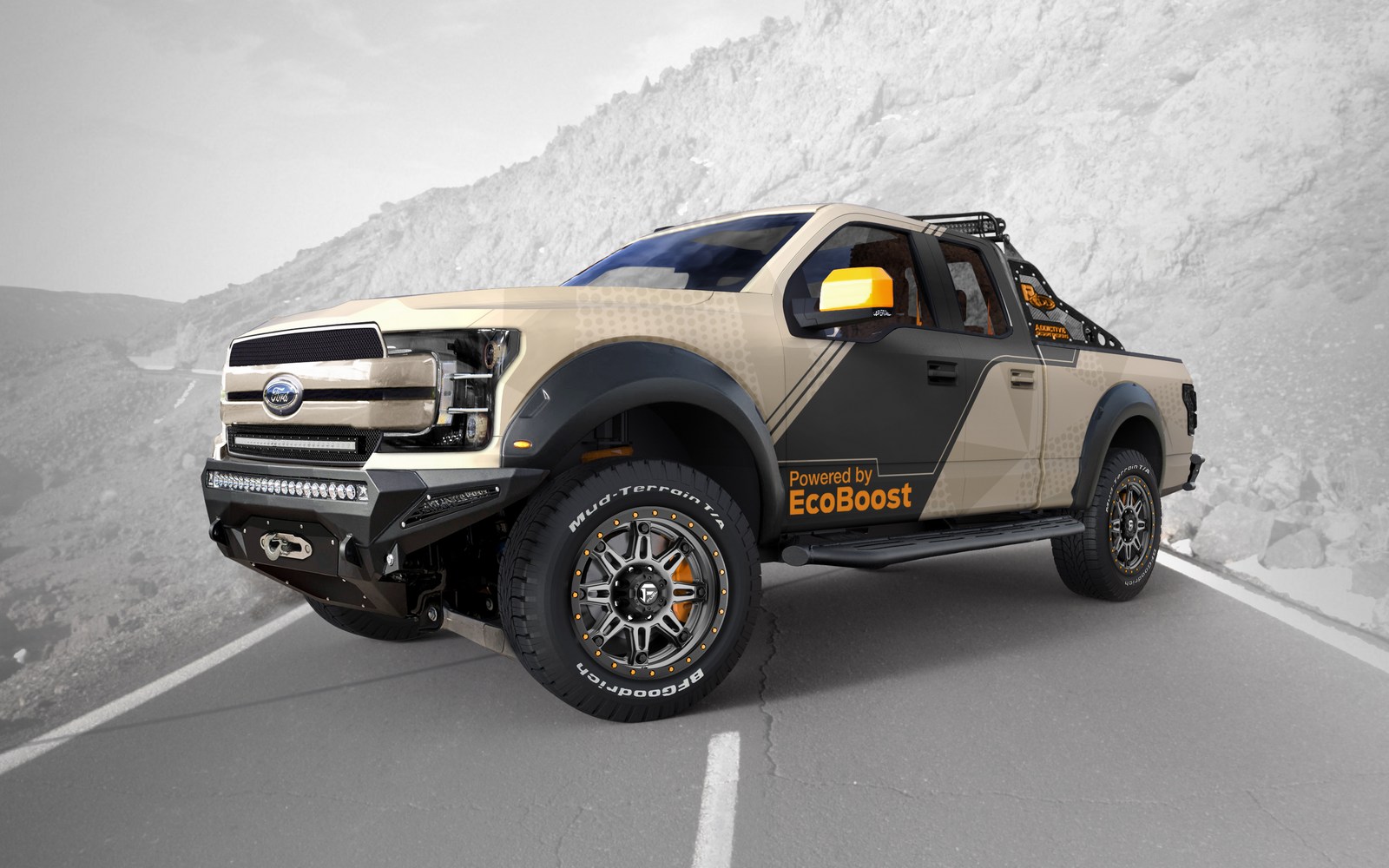 The CJ Pony Parts F-150 is another off-road focused model as it has a seven-inch lift kit, powder-coated suspension components, and forged beadlock wheels with BFG Mud-Terrain tires. Other off-road goodies include Lund fender flares, rugged bumpers, and an underbody LED lighting kit for tackling tough terrain at night.

Under the hood, there's a 3.5-liter EcoBoost V6 engine with a cold-air intake and a cat-back exhaust. It also runs a custom SCT tune. 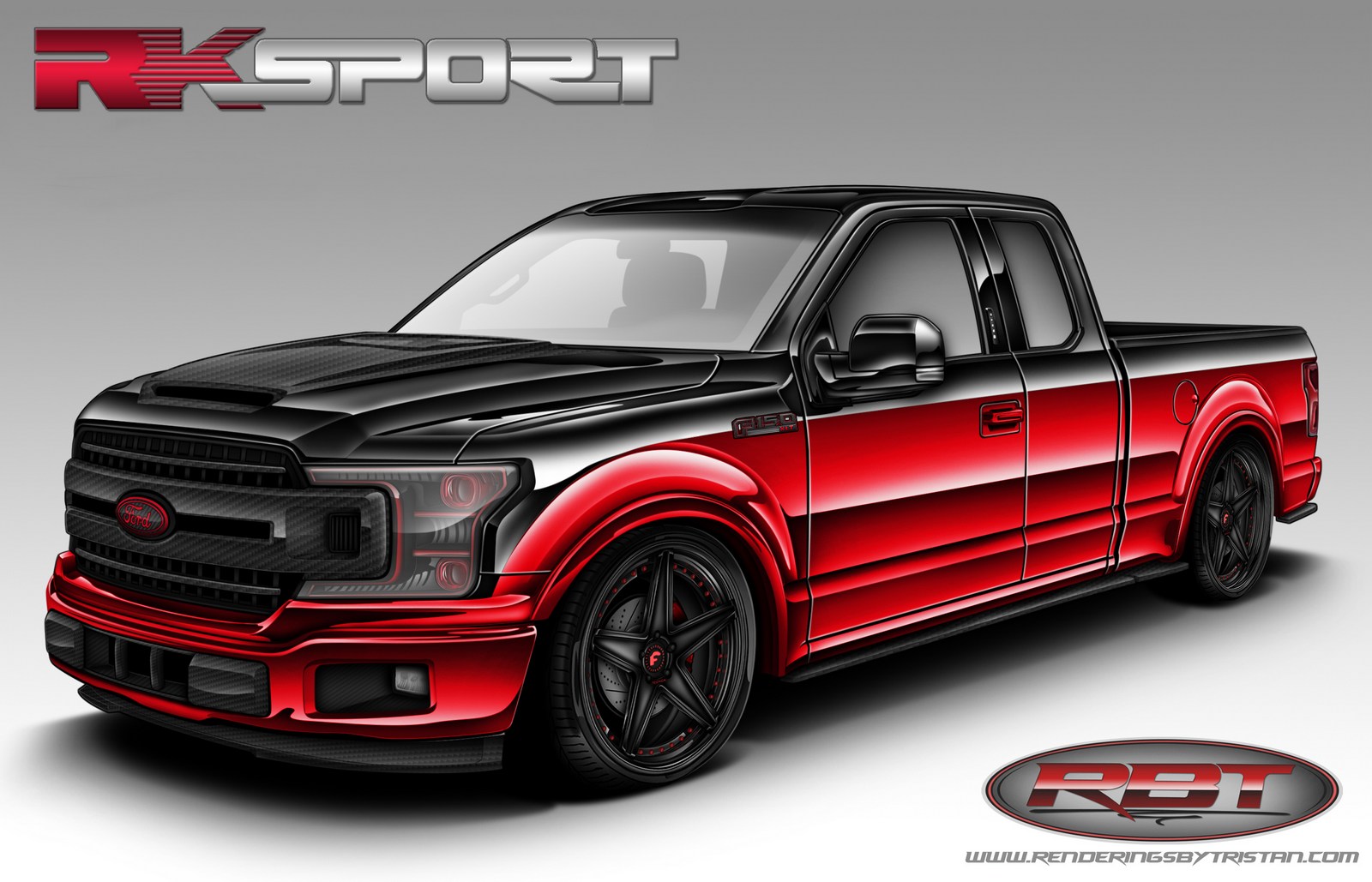 RK Sport's F-150 goes in a different direction as it features a lowering kit, a custom suspension, and rear-wheel drive. The team also equipped it with a number of carbon fiber components including a ram air hood, a front splitter, and a rear spoiler.

Other highlights include a Katzkin leather interior and a 2.7-liter EcoBoost V6 featuring a cold-air intake, a cat-back exhaust, and a Cunningham Motors tune. 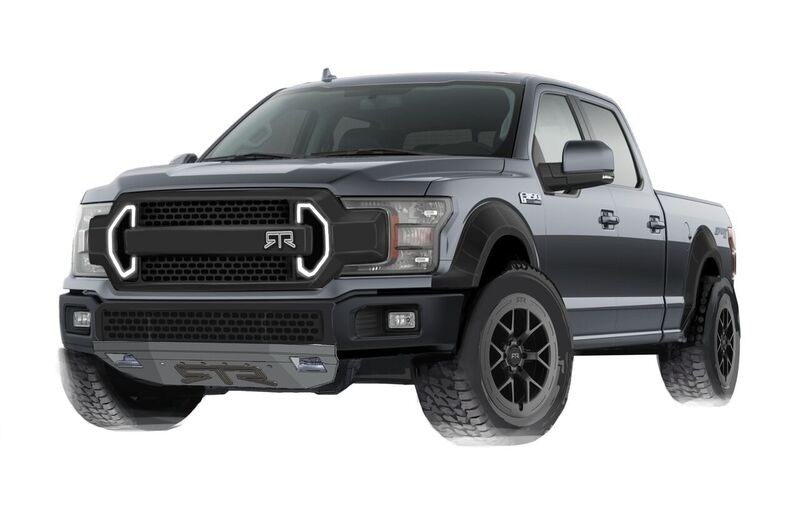 The RTR Muscle Truck joins the 2018 RTR Mustang and it has a new grille, revised fender flares, and LED daytime running lights. Other styling changes include the addition of a skid plate and RTR Tech 6 wheels with Nitto Ridge Grappler tires.

Bigger changes occur underneath the skin as the truck has been outfitted with new coilovers, upgraded rear dampers, and an extended double wishbone suspension. There's also a heavy-duty rear axle, a Katzkin interior, and a dash plaque signed by Vaughn Gittin Jr. 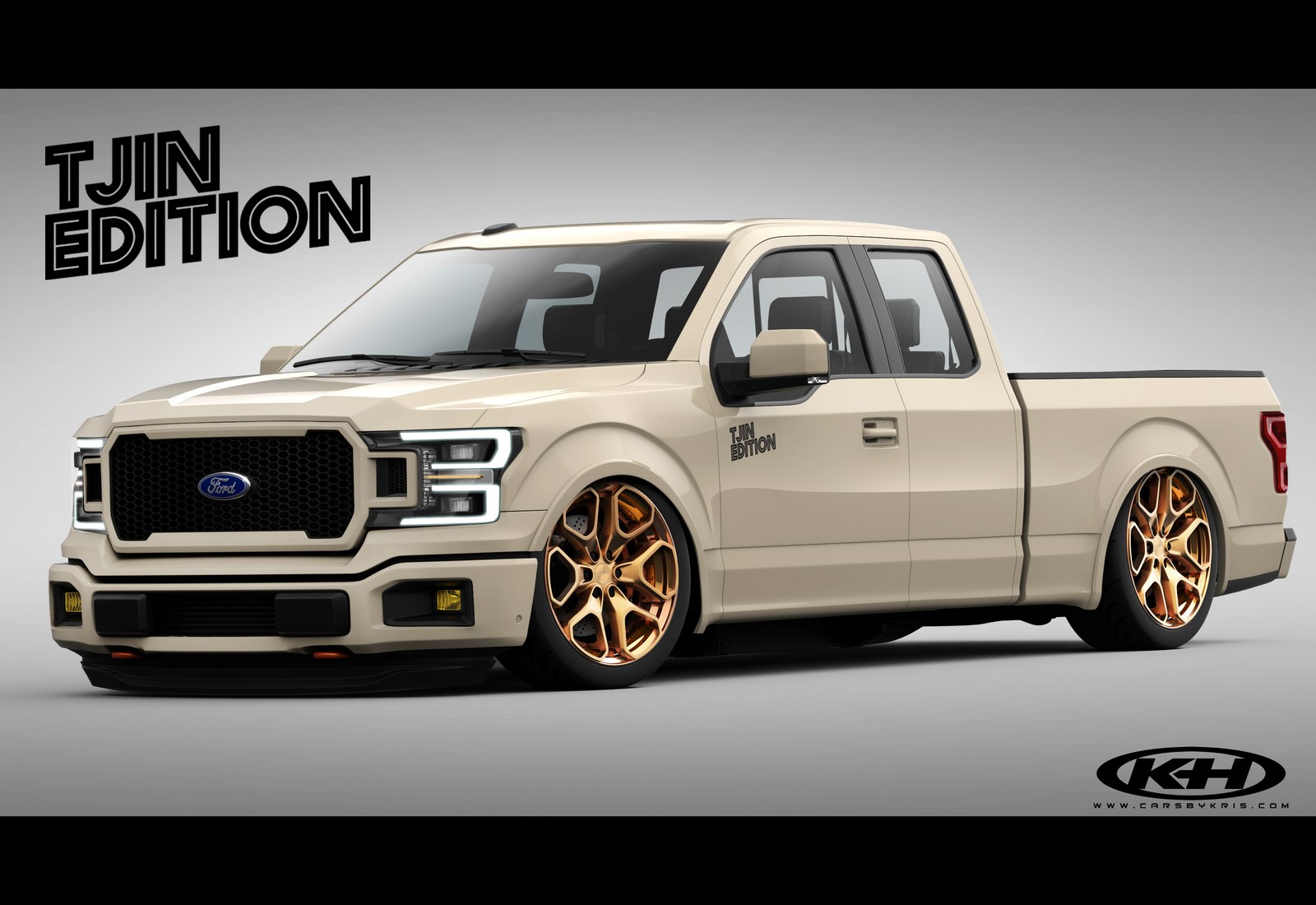 The Tjin Edition F-150 is a low-rider that boasts an Air Lift suspension, Baer brakes, and 24-inch Rotiform wheels. Additional changes are limited but include a custom paint job, a tonneau cover, and a Katzkin leather interior with a Kicker audio system.

The Operator F-350 By Hellwig 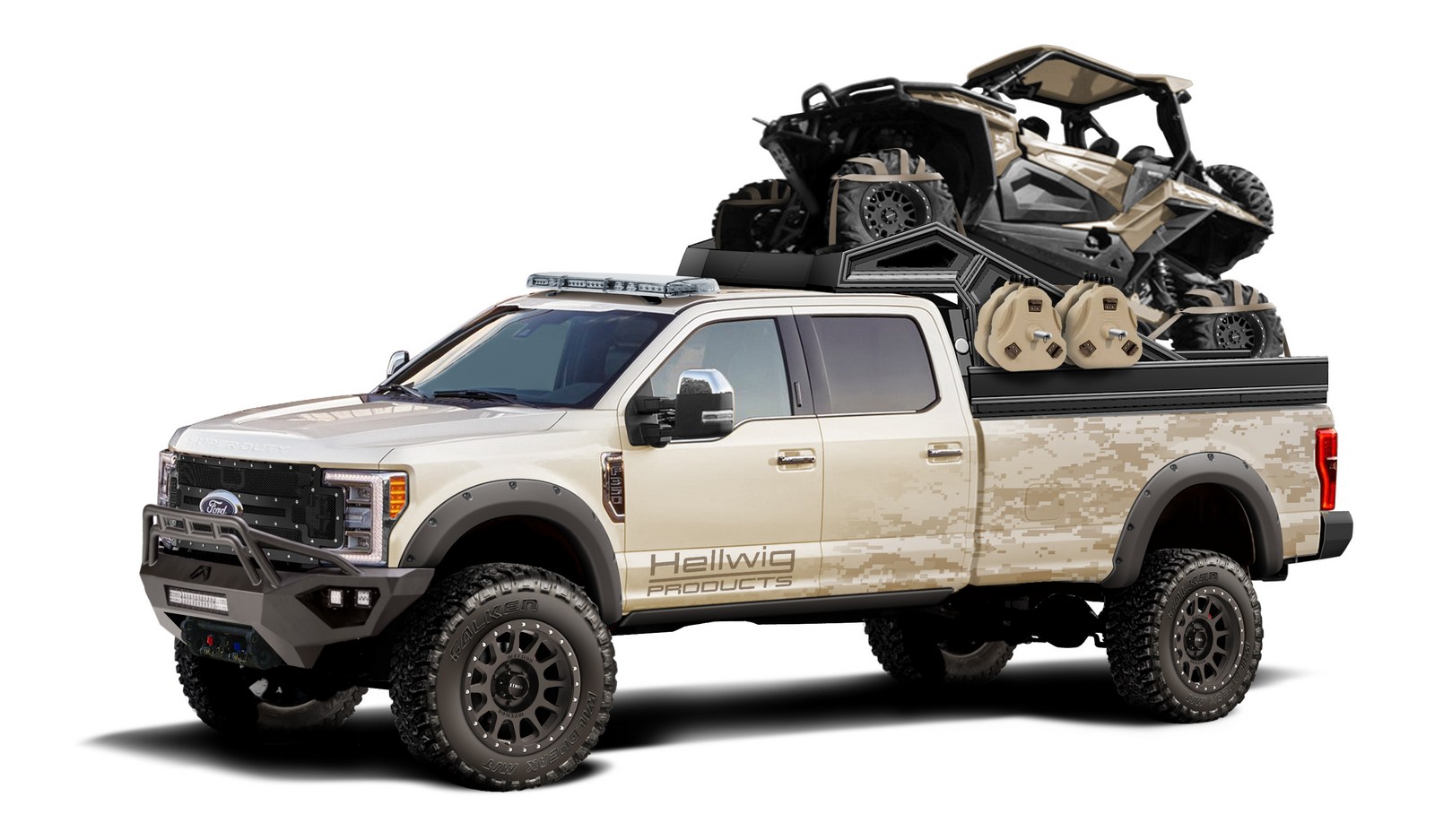