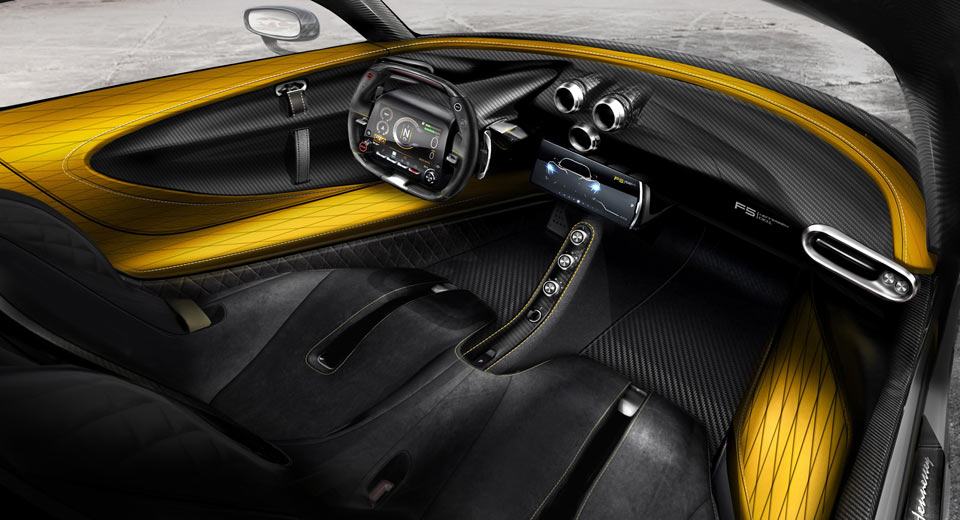 Shortly after Hennessey premiered the Venom F5 at the SEMA Show in Las Vegas, the Texas tuner has released the first images of the hypercar�s interior.

Like a recent teaser image indicated, the cabin of the Venom F5 is dominated by carbon fiber and looks to be a serious improvement over the Venom GT in terms of overall quality.

Unsurprisingly, the cabin is quite narrow and consists of two bucket seats which appear to be fixed to the floor. Elsewhere, the Venom F5 includes a narrow, carbon fiber transmission tunnel that runs up to a large touchscreen housing the car�s infotainment features. Elsewhere, we can see a trio of air vents arranged in a similar format to the tailpipes.

Two different steering wheel and gauge clusters will be offered to customers. The first sees the fitment of a carbon wheel with a flat bottom and top. It is then joined by a digital gauge cluster. Alternatively, Hennessey will also offer a steering wheel that houses its very own cluster, somewhat similar to the Aston Martin Valkyrie.

As cool as the interior of the Venom F5 is, it is far from the vehicle�s standout feature. Instead, it is the twin-turbocharged V8 engine with 1,600 hp that promises to make the Venom F5 unlike any car before it, potentially capable of accelerating to over 300 mph (482 km/h).