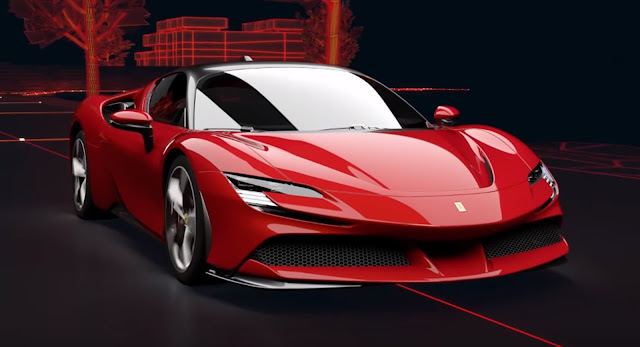 Understanding how an advanced hybrid powertrain works can be a little difficult. Thankfully, Ferrari has released a video which shows how the system in the SF90 Stradale operates.


Sitting behind the driver is a twin-turbocharged 4.0-liter V8 engine producing 769 hp and 590 lb-ft (800 Nm) of torque. This gasoline-fueled unit is paired with three electric motors, one of which is fitted between the V8 and the eight-speed dual-clutch transmission while the other two are located at the front axle to produce a combined 986 hp.

Should drivers choose to save fuel, the SF90 Stradale can be driven in front-wheel drive mode (!) with just the front two electric motors for up to 25 km (15.5 miles). Regenerative braking is also incorporated into the powertrain.

One particularly interesting aspect of the SF90 Stradale which this clip briefly highlights is the proliferation of touchscreens found through the supercar’s cabin. Most of the steering wheel, for example, doesn’t include physical buttons and instead touch-sensitive displays which drivers use to set things such as cruise control. Even the Engine Start/Stop switch in the center of the steering wheel is a touch display.

The SF90 Stradale is exceptionally lightweight for a vehicle of its kind, tipping the scales at just 3,461 lbs (1,570 kg), despite the hybrid system adding 595 lbs (270 kg) to the vehicle.
Tags : Ferrari, Ferrari SF90 Stradale, Ferrari Videos, Hybrids, New Cars, Tech, Video,
Share to: