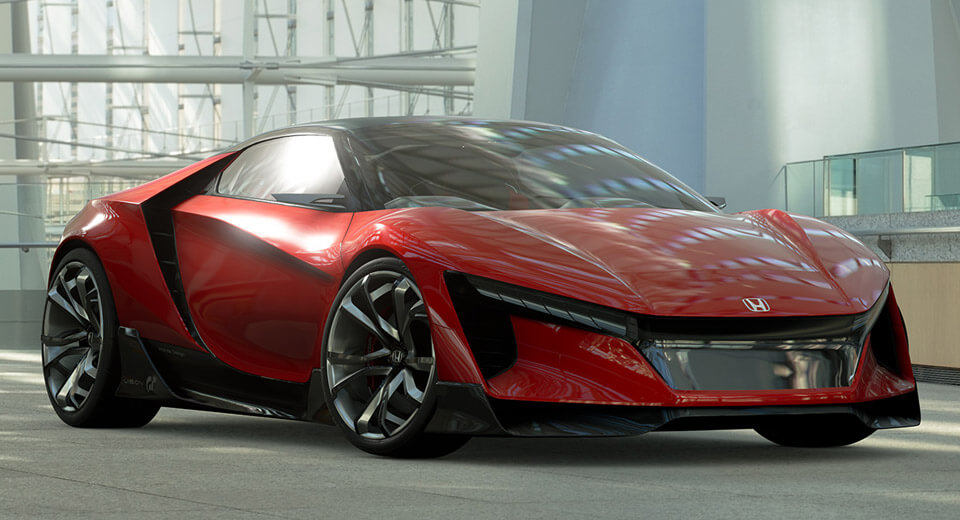 Vision Gran Turismo concepts often take on proportions of the outlandish: Le Mans prototypes, almost, without any regulations or practical considerations to take into account. Honda, however, has taken a different approach.

The Japanese automaker today released its latest contribution to the pantheon of digital sports-car concepts in the form of the Honda Sports Vision Gran Turismo. And while it may not be quite ready for the showroom, it looks a lot closer than most of its virtual-reality stablemates.

It also looks familiar: distinctly similar, in fact, to the patent images we saw over two years ago. At that point we thought we were looking at a baby NSX. And it could manifest into just that. But for now, it's confined to the imaginary world of the Gran Turismo gaming franchise.

The concept was designed by Honda's studio in California and developed in Japan. And while it may (for the time being) exist principally in digital form, a full-scale model was built and tested in a wind-tunnel – not just in computational fluid dynamics simulators.

The brief calls for carbon-fiber-intensive construction to help keep weight down to a (theoretical) 1982 pounds. That's just over half of what today's NSX weighs, a good third less than the old S2000, and barely more than the tiny S660 roadster.

The other side of the power-to-weight ratio is a 2.0-liter DOHC-VTEC turbo four – similar, we'd imagine, to the one found in the Civic Type R, but tuned to produce over 400 horsepower and mated to an eight-speed dual clutch transmission.

It all sounds and looks great. Fantastic, even – which is exactly what this concept is... for now. Here's hoping it manages to leap off our TV screens and onto the street in the near future.