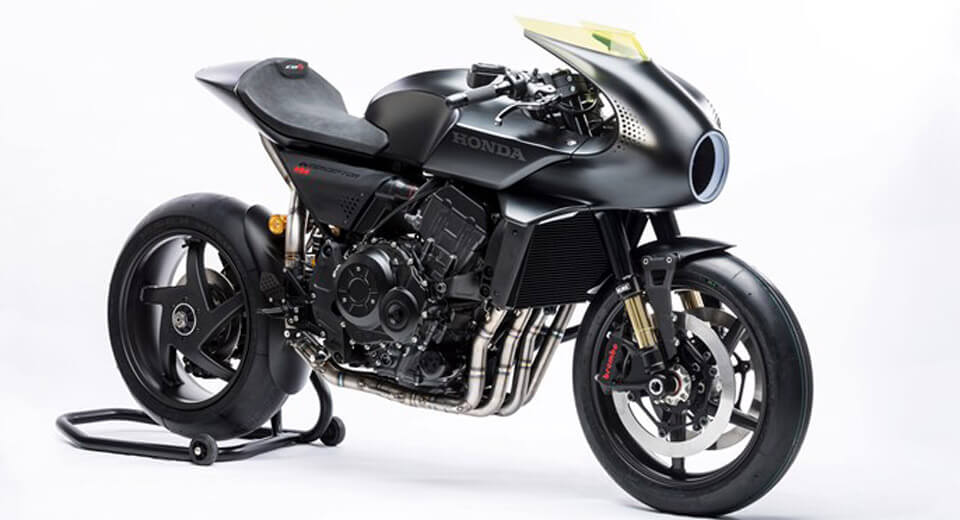 You may have noticed that Honda is on a bit of a retro-futuristic kick of late. It showcased the Urban EV hatchback concept in Frankfurt, and the Sports EV coupe concept in Tokyo. And it's been doing the same with its motorcycles, too.

Just take a look at the concept bike it's brought to the EICMA motorcycle show in Milan this week. It's called the CB4 Interceptor, and it blends classic cues with thoroughly modern ones.

The cowling looks like it was lifted straight off of a 1960s racing bike, but it hides a modern secret. In the middle of the LED headlight ring is a fan that generates electricity from the rushing wind to power the touchscreen display on the tank, capable of displaying navigation information, make emergency calls, and network with the rider's mobile device for a less distracting (but no less connected) ride.

It's all done up in black, and was designed at Honda's R&D facility in Rome. It's not the first such concept the Japanese manufacturer has done, though. Two years ago it displayed a similar (but different) CB4 concept at the same show, and recently showcased the Neo Sports Café concept in Tokyo alongside the Sports EV coupe. Something tells us we've yet to see the last of this particular trend coming from Honda, so keep this page bookmarked.