Jaguar F-Type Climbs Up The Factory Wall To Honor Veterans 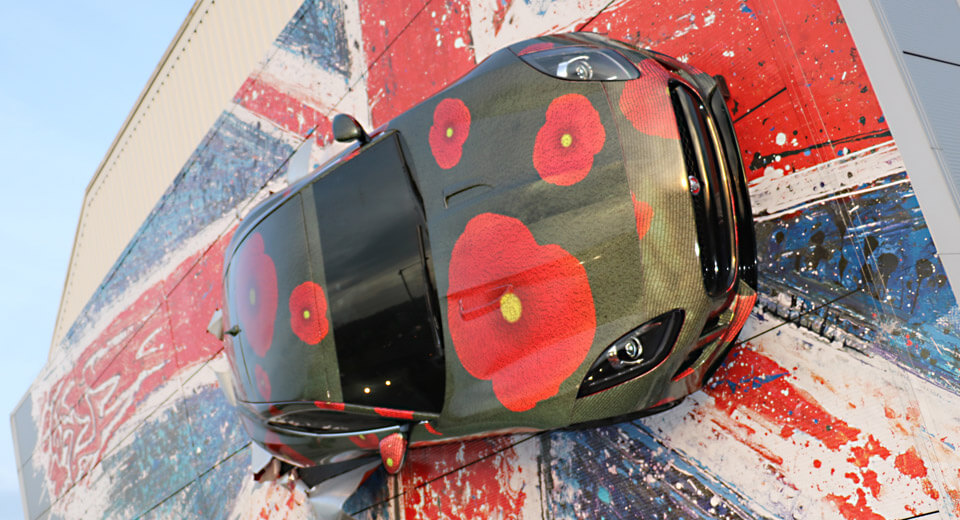 A sports car that handles as well as the Jaguar F-Type may feel like it can drive up a wall, but this one actually is.

To honor Britain's men and women in uniform, past and present, Jaguar emblazoned an F-Type with a special poppy livery, reminiscent of the symbol of remembrance.

The vehicle has been installed on the face of Castle Bromwich, where Jaguar builds the F-Type and where the Spitfire fighter aircraft was built between 1938 and 1945.

The installation, which bears the words of John McCrae's enduring poetic WWI tribute In Flanders Field, sits 35 feet high – opposite the Sentinel sculpture and visible to motorists traveling down the M6 motorway.

Honored with the Gold Award of the Armed Forces Covenant employer recognition program, Jaguar Land Rover has hired 750 former servicemen and women since 2013 alone – including 18 wounded veterans in its own ranks, and another 11 at associated suppliers.

A second F-Type SVR with the same livery is slated to embark upon a ten-day tour of the UK. The tour kicks off on the Royal British Legion's Birmingham Poppy Day, serving along the way as safety car for the Mission Motorsport's fourth annual Race of Remembrance, and ending on Remembrance Sunday.