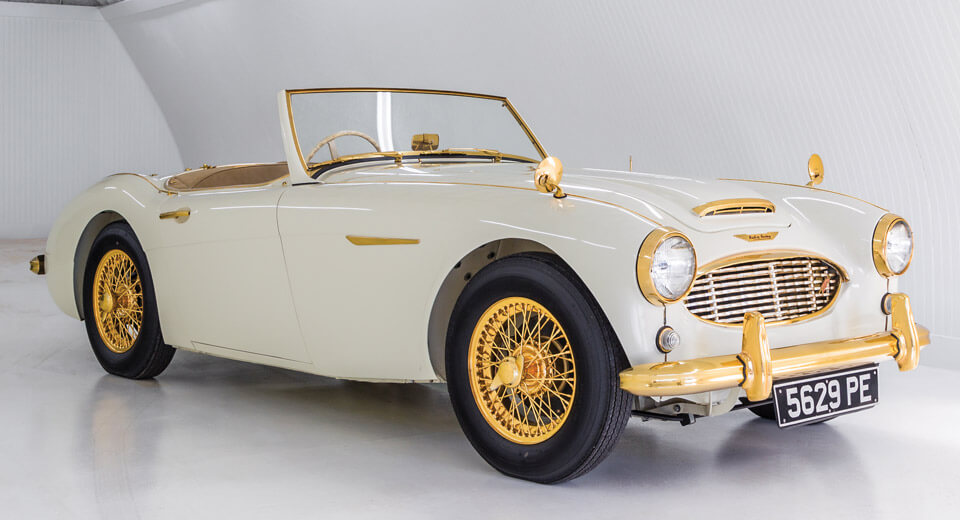 You might expect to find gold trim on a Rolls-Royce. Maybe an old Jaguar, even. But an Austin-Healey?

That's what visitors must have pondered when they saw this roadster at the Earls Court Motor Show in London back in October of 1958. And it certainly captured their attention.

That was the whole point, after all. And it wasn't decked out as such after the fact. This is how it left the factory.

The one-of-a-kind 1958 Austin Healey 100-Six was created as a publicity stunt, painted ivory with everything (and then some) that would be dipped in chrome plated in 24-karat gold instead: the wheels, brake discs, badges, bumpers, mirrors, instruments... all the way down to the washers and screws. The cockpit was all decked out in champagne Connolly suede, with matching mink fur trim on the seats.

Valued at nearly four times the price of a standard 100-Six, the car was sold before the show even opened to the Daily Express, which gave it away as part of a contest.

It subsequently passed through a number of hands before experts Bruce and Inan Phillips of Healey Surgeons were commissioned to restore it in 1983. Jeff's Resurrections out of Taylor, Texas, restored it again in 2012, and now it's heading to the auction block as “the most fantastic Austin-Healey ever produced” (and the only road-going model the company ever made with four-wheel disc brakes).

It's consigned without reserve price for sale in New York next month, where it's expected to sell for between $350,000 and $550,000. Put on your sunglasses and check it out in the gallery of images below by Pepper Yandell for RM Sotheby's.