What'll It Be, Four LaFerraris Or This Classic California Spider? 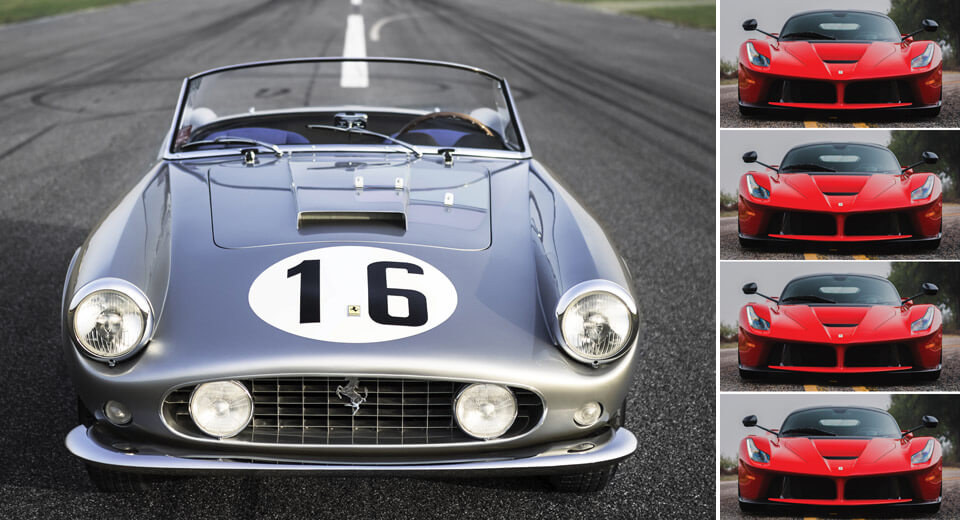 Nobody ever said a Ferrari would be cheap. But even among Prancing Horses, some are more expensive than others. Much, much more expensive.

Take this latest classic consigned to RM Sotheby's for its upcoming sale in New York, for example. It's a 1959 Ferrari 250 GT LWB Competizione Spider – not unlike the one immortalized in Ferris Bueller's Day Off, only considerably more so.

Chassis number 1451 GT was the second of just eight California Spiders bodied in aluminum and built to competition specifications. And it raced, finishing third in its class and fifth overall at Le Mans in 1959 before going on to compete in (and even win) other local events in the United States.

Ferrari Classiche-certitied, extensively restored in 2011, and returned to its original Le Mans livery, 1451 GT took first in its class at Pebble Beach and a platinum award at the Cavallino Classic. When it crosses the block a month from now, the auctioneer expects it will sell for upwards of $14 (and as much as $17m).

For that kind of money, you could put four LaFerraris in your garage. In fact, if that's more to your liking, there'll be one up for grabs at the same event, where it's expected to sell for about $3.5 million (or a quarter of the California's low-end value). There's a (relatively) more accessible 250 GT convertible – a 1961 Series II Cabriolet – also on offer with a ~$1.7-million estimate.

Those are just a few of the seven-figure lots consigned, but the alloy California is the highest, and only one valued at eight figures. Take a gander at the gallery of images below by Cymon Taylor and Diana Varga, courtesy of RM Sotheby's.