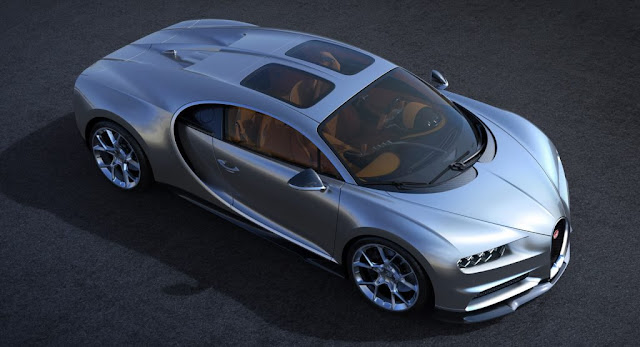 In between the development of the Divo and probably still looking to shatter the top speed record for production cars, Bugatti has revealed the newest option for the Chiron: a glass roof.

Called ‘Sky View’ by the Molsheim-based car maker, it consists of two fixed panels above the driver’s and passenger’s heads, 65cm (25.6in) long and 44cm (17.3in) wide each.

The glass roof provides an additional 2.7cm (1.06in) of headroom according to Bugatti, and is tinted for extra privacy and to prevent dazzle effects, filtering out UVA and UVB radiation. It also “offers outstanding noise abatement”, and doesn’t affect the overall stiffness or crash safety of the potentially record-breaking hypercar.

Also Watch: Bugatti Chiron Vs. Veyron SS Is The Battle We’ve All Been Waiting For

Bugatti says the Sky View is available as an optional extra with immediate effect, although they don’t talk about costs. Still, when someone can afford to blow a few millions of dollars on one of the best vehicles the world has ever seen, it’s very likely they won’t mind spending another four or perhaps five-digit sum to be able to look at the sky directly from the cockpit.

A Bugatti Chiron equipped with the optional glass roof will sit under the California sun, at the Monterey Car Week, at the end of August.

Hopefully, by then we’ll also be able to report everything about the Bugatti Divo, a more extreme version of the Chiron offered in only 40 units, which will be approximately twice as expensive than the average hypercar made in Molsheim.
Tags : Bugatti, Bugatti Chiron, Pebble Beach, Reports,
Share to: