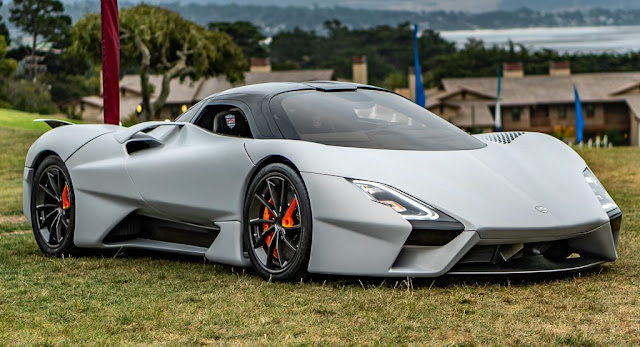 Looking virtually identical to the concept that was unveiled over seven years ago, the production Tuatara has a sleek carbon fiber body that allows the model to have a drag coefficient of 0.279. The company says this is significantly lower than competitors such as the Bugatti Chiron (0.36), Koenigsegg Agera (0.33) and Hennessey Venom F5 (0.33).

SSC North America hasn’t released detailed specifications, but the company confirmed the Tuatara will be powered by a twin-turbo 5.9-liter V8 engine which features an 8800 rpm redline and an 8.8:1 compression ratio. The company went on to say the engine will produce 1350 hp (1006 kW / 1368 PS) when running on 91 octane fuel. The engine can also run on E85 and this will allow the mid-mounted behemoth to produce an astounding 1750 hp (1305 kW / 1774 PS).

The engine will be connected to a seven-speed “computerized” manual transmission which features a “robotic shift system.” The company declined to elaborate, but has previously said the engine and transmission will allow the Tuatara to have a “top speed that is projected to easily surpass the current world record.” SSC is presumably talking about the Koenigsegg Agera RS which topped out at 284.55 mph (457.94 km/h) and averaged a two-way top speed of record of 277.87 mph (447.19 km/h).

There’s no word on production numbers or pricing, but additional information will likely be announced closer to the car’s launch.
Tags : New Cars, Pebble Beach, SSC, SSC Tuatara,
Share to: