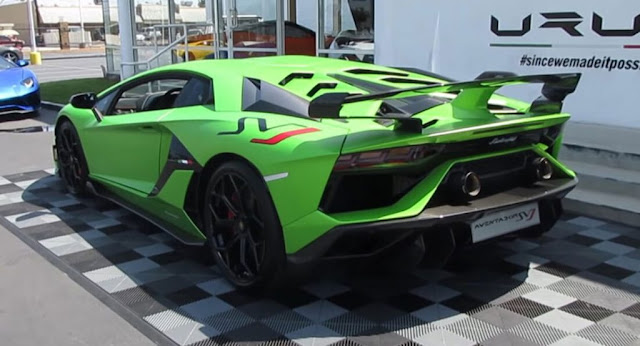 It’s been a couple of weeks since Lamborghini introduced the Aventador SVJ to the world, and the first unit of the record-breaking supercar has already arrived at the Newport Beach dealership.

Greeted by other exotics and petrol heads alike, the Aventador SVJ fired up its sonorous naturally aspirated 6.5-liter V12 and was carefully driven inside.

The video shows a few revs as well, which, unlike the ones in the official promo released by the Italian firm, aren’t accompanied by any background music, editing or special effects, so what you hear is what you really get. If you are one of the 900 lucky individuals that have secured one, that is – or, more likely, just happen to see one in the flesh.

The SVJ benefits from a lot of clever engineering, including the active aerodynamics, rear-wheel steering that allows it to perform better at high speeds and improves its handling at low speeds, and an optimized gearbox.

All the aforementioned features make the Aventador SVJ an absolute beast and helped it secure the lap record on the Nurburgring, completing the course in 6 minutes and 44:95 seconds.
Tags : Lamborghini, Lamborghini Aventador, Lamborghini Videos, New Cars, Video,
Share to: