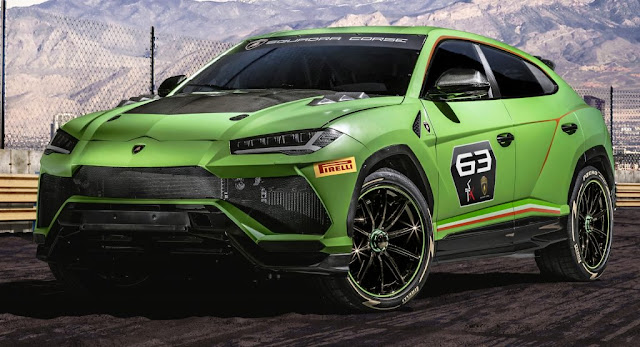 Lamborghini Squadra Corse has taken the wraps off the new Urus ST-X concept.

Created for a unique racing series that combines off-road driving with a traditional circuit, the Urus ST-X concept has an aggressive design and a matte Verde Mantis livery.


Lamborghini didn’t go into too many specifics, but the racing crossover has been equipped with a ventilated carbon fiber hood, larger air intakes and 21-inch center-locking wheels with Pirelli tires. A closer inspection also reveals carbon fiber mirror caps, a small rear wing and “lateral racing exhausts with a new hexagonal design.”

Since the crossover was designed for competition, it has been outfitted with a number of FIA-approved safety features including a steel roll cage, a fire suppression system and an FT3 fuel tank. Lamborghini Squadra Corse also worked their magic on the Urus and this led to a 25% weight reduction compared to the standard model. This suggests the concept weighs less than 3,637 lbs (1,649 kg).

The Urus ST-X concept will make its track debut at the 2019 Lamborghini World Finals and will likely go into limited production as the on- / off-road racing series kicks off in 2020. The series will be held at specially prepared FIA-approved circuits in Europe and the Middle East and the series will follow “an arrive and drive formula designed to offer driver-customers a complete package including car and technical support during the race weekends.”