Hyundai Pickup Truck Coming “As Soon As Possible”, Kia Might Launch One, Too 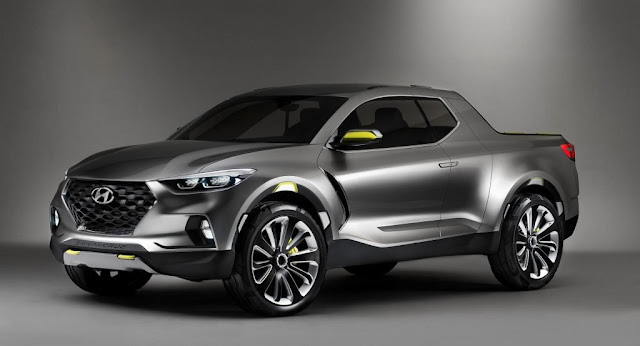 Hyundai has been planning a pickup for a few years now. It was previewed by the Santa Cruz Concept in 2015, and it’s expected to hit the market in the near future.

In fact, the Korean brand’s Chief Design Officer, Luc Donckerwolke, told Autocar that it will arrive “as soon as possible”.


“You’ve seen the (Santa Cruz) pick-up from the 2015 Detroit show, that car is under development at Hyundai”, said Donckerwolke. “From my side, it is finished, the process to put it into production is now under way.”

It’s still unknown whether the production version of the Santa Cruz will rival the likes of the Ford Ranger and Toyota Tacoma in North America, or go after the larger F-150 and Chevrolet Silverado.

Donckerwolke also revealed that a Kia pickup could follow, and this is believed to compete with the Renault Alaskan, Mercedes-Benz X-Class, Mitsubishi L200 and others in Europe.

Kia’s new U.S. COO, Michael Cole, hinted at such a model by saying that a pickup is “something we could look at”. Nonetheless, it won’t debut until Kia has strengthened its SUV lineup. One of the vehicles that’s coming in the next few months is the Telluride, with seating for up to 8 occupants.

Hyundai is said to have based their upcoming pickup on a crossover platform. This might make it less capable off-road than body-on-frame rivals, but will likely reflect in the final price of the product, as well as ride comfort, which should be SUV-like.