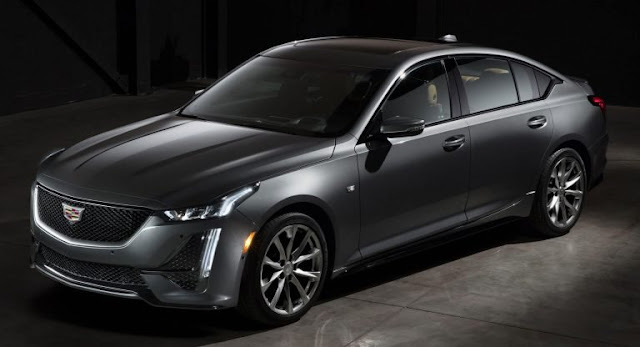 While some automakers believe that sedans have no future in today’s SUV-saturated market, Cadillac is still betting on premium saloons and has just unveiled the all-new CT5.


Serving as a replacement for both the ATS and the CTS, it slots under the CT6 and has just made an online appearance, prior to its 2019 New York Auto Show premiere that’s set for next month.

The modern Cadillac styling language is present, although with a few unique touches inspired by the Escala Concept. As a result, the CT5 comes with a pair of slim headlights, vertical DRLs and muscular lines that run across the length of the hood. It also has a sporty profile with the slightly sloping roofline.

When it will go on sale later this year, the CT5 will be available in two trim levels, Sport and Luxury. The first one is depicted in the image gallery with a grey look and darkened taillights, whereas the second one has a dark red finish and red taillights.

A single image released by the automaker provides a glimpse inside. It focuses on the electronic gear shifter and rotary knob used to control the infotainment system. Elsewhere, the car has leather upholstery and wood trim, as well a climate control system and ventilated front seats, among others.

Based on an evolved version of the Alpha platform, the CT5 uses a standard 2.0-liter turbocharged inline-four or an optional 3.0-liter twin-turbo V6. Both units are paired to a 10-speed automatic transmission. Production of the car will take place at General Motors’ Lansing Grand River facility, which has received a $211 million cash injection.

Update: The original title of the article (as some of you have pointed out) referred to the new CT-5 as a BMW 5-Series rival. The truth is that, since we do not have any info on the car’s dimensions and pricing, this might very well not be the case. What we do know is that it replaces the compact ATS and the larger CTS, so it could fall somewhere in the middle in terms of size, but closer to the 3-Series, A4 etc. in terms of pricing. However, unless Cadillac announces the exact specs in the following days, we’ll have to wait until April 19, when the NY Auto Show opens, to find out.
Tags : Cadillac, Cadillac CT5, New Cars, New York Auto Show,
Share to: