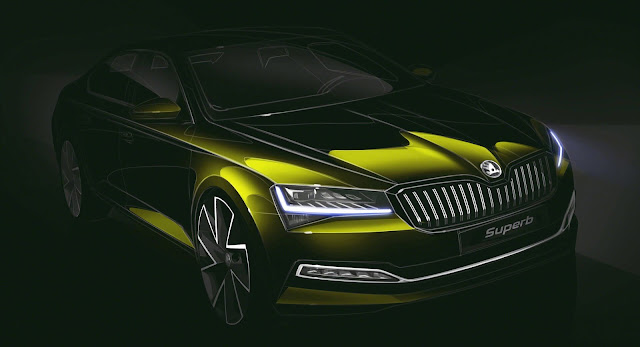 More than four years after its debut, the third generation Skoda Superb is about to welcome a mid-life refresh. Its arrival, set for the IIHF Ice-Hockey World Championship in Bratislava, Slovakia later this month, has been announced with a teaser image that previews some of the visual changes.


At the front, it gets revised light clusters and reworked lower part of the bumper, whereas the trademark grille design has been maintained. Moving further to the back, the car will get the ‘SUPERB’ lettering across the boot lid, instead of the usual logo, and updated LED graphics, joined together by a band, as revealed by previous spy shots, which could be either a chrome or a light strip.

The interior design is expected to have been rejuvenated with new infotainment screens and standard Android Auto and Apple CarPlay smartphone integration. Elsewhere, it’s likely that Skoda will be offering some trim revisions alongside other updates that will bring the Superb up to speed in the segment.

For the first time, the 2020 Superb will come with a plug-in hybrid powertrain. The more eco-friendly version of the car is thought to use the same assembly as the Volkswagen Passat GTE, which combines a 1.4-liter turbo-four with an electric motor to deliver a combined output of 218 PS (215 hp / 160 kW) and 400 Nm (295 lb-ft) of torque. The German model uses a 9.9 kWh lithium-ion battery that allows it to travel for up to 50 km (31 miles) on electricity.
Tags : New Cars, PHEV, Skoda, Skoda Superb,
Share to: