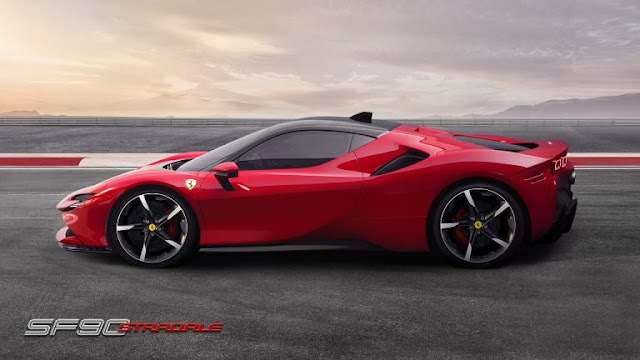 After a flurry of last minute leaks, Ferrari has officially unveiled their first plug-in hybrid.

Dubbed the SF90 Stradale, the car is a series-production supercar which celebrates the 90th anniversary of Scuderia Ferrari and the strong link between the company’s road and track cars.


Of course, the big news is the powertrain which features a turbocharged 4.0-liter V8 engine that produces 769 hp (574 kW / 780 PS) and 590 lb-ft (800 Nm) of torque. It is paired to a hybrid system which features three electric motors. One of motors is sandwiched between the V8 and a new eight-speed dual-clutch transmission, while the other two are located at the front axle. 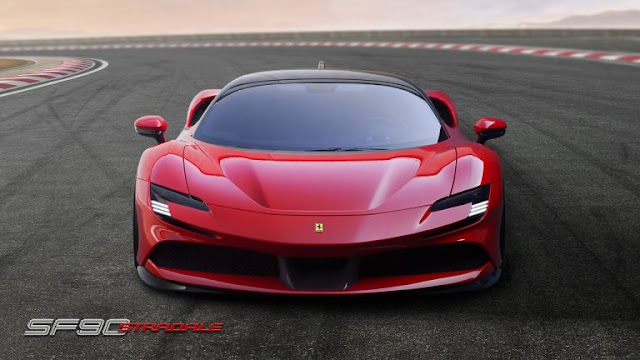 Ferrari acknowledged that keeping the weight down was a “challenge” as the hybrid system added 595 lbs (270 kg) to the vehicle. However, they managed to accomplish this by using a multi-material body and chassis. These components are constructed out of a number of lightweight materials including carbon fiber and new aluminum alloys. The changes to the chassis didn’t just save weight as Ferrari revealed the architecture has 20% higher bending stiffness and 40% higher torsional rigidity than previous platforms.

Sticking with the performance theme, the SF90 Stradale has a new eManettino switch mounted on the steering wheel. It allows drivers to select between four different operating modes for the powertrain. 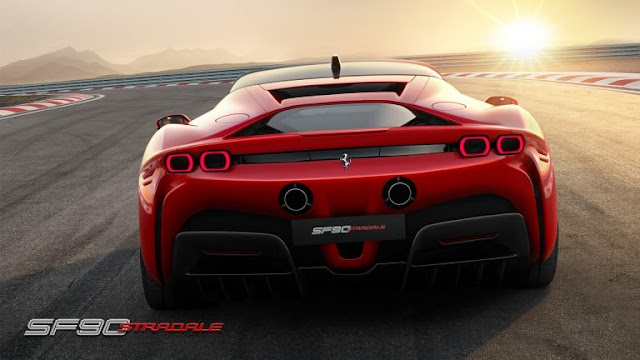 eDrive is the aforementioned EV mode which allows the car to travel silently in the city. Hybrid mode, on the other hand, is the default setting and it optimizes the overall efficiency of the powertrain. Performance mode keeps the V8 engine running at all times so “power is instantly and fully available when required.” Lastly, Qualify mode allows the car’s full potential to be unleashed as it prioritizes performance over battery charging and allows the electric motors to produce their maximum output.

Engineers also developed a new electronic Side Slip Control (eSSC) vehicle control system which optimizes driving dynamics. It incorporates an electric traction control system which “optimally manages the availability of the torque – both ICE and electric – distributing it to the individual wheels to suit driving conditions and grip requirements.” The eSSC also features a torque vectoring function – which relies heavily on the front electric motors – and a high-tech braking system which allows “braking torque to be split between the hydraulic system and the electric motors.”

On the styling front, the car is a billed as a “radical evolution” of sports cars produced over the past 20 years. The shape is instantly recognizable, but the model adopts slender LED Matrix headlights, a more curved windshield and slimmer A-pillars. The model also has aerodynamic side skirts, high-mounted intakes and a radical rear end. The latter boasts a prominent diffuser, dual exhaust tips and Camaro-like taillights.

The rear end of the car will likely prove controversial, but its design has a purpose – aerodynamics and downforce. As Ferrari explained, the engine cover is split into two sections. The lower section – with the third brake light – is fixed, while the other is “mobile.”

According to the company, “In urban usage or at maximum speed, the two sections are aligned and suspended above the engine cover, with the mobile wedge acting as an efficient fairing to the fixed element, allowing the air to flow both above and beneath the shut-off Gurney. In high downforce conditions (such as driving through corners, braking or in abrupt changes of direction), the mobile element is lowered by a pair of electric actuators, closing the lower blown area and uncovering the fixed element, generating a new tail geometry characterized by a broad load surface topped by a powerful nolder.” 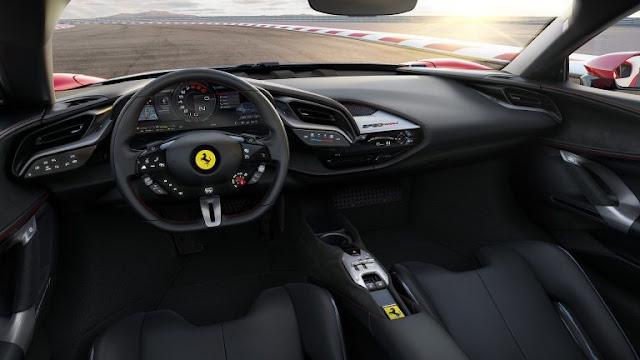 The futuristic styling continues in the cabin as there’s an “aeronautically-inspired cockpit” with a massive 16-inch digital instrument cluster. It features a center-mounted tachometer which is flanked by navigation and infotainment displays.