BMW M760Li Looks Like A Big M3 In Austin Yellow 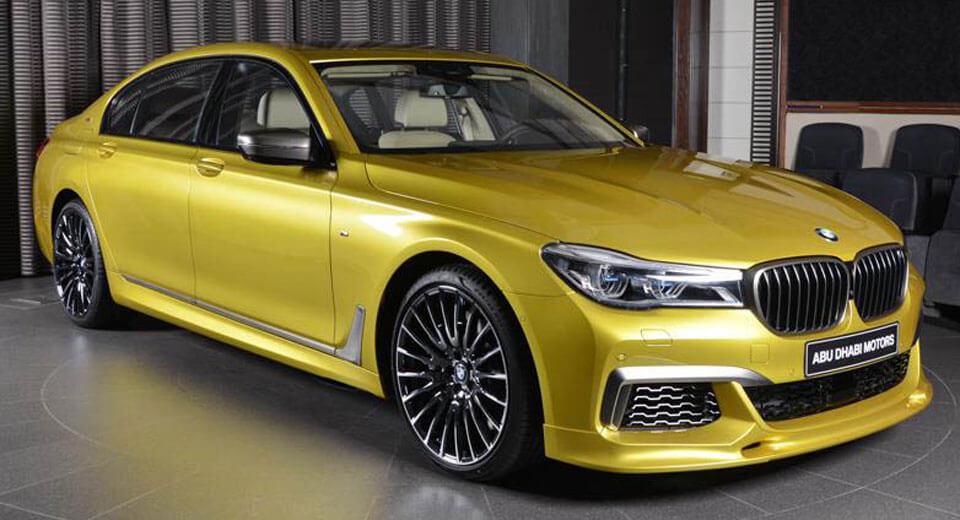 BMW M cars have been known to wear some rather eye-catching paint schemes. The flagship M760Li somewhat less so, targeted as it is at a more conservative demographic. But even that twelve-cylinder performance sedan can get in on the brightness.

The latest example to cross our radar screens is this one from Abu Dhabi Motors, which is displaying an M760Li xDrive in Austin Yellow – a color we'd more expect to see on an M4 than on the big sedan.

As if the mustard metallic 7 Series weren't sporty-looking enough already, this one also features a 3D Design body kit, Alpina rear spoiler, and 21-inch multi-spoke alloys in Liquid Black. Inside, things are a little more luxury-oriented than the sporty exterior would suggest, with light cream leather and wood trim.

Like the Rallye Green example we brought you last month (from the same dealer, no less), this car was custom-ordered through the BMW Individual program, but like any other M760Li (as if you're bound to see that many of them), it packs a 6.6-liter twin-turbo V12 sending 610 horsepower and 590 lb-ft of torque through an eight-speed automatic to all four wheels for a 0-60 time quoted at 3.7 seconds and a top speed limited to 189 miles per hour.