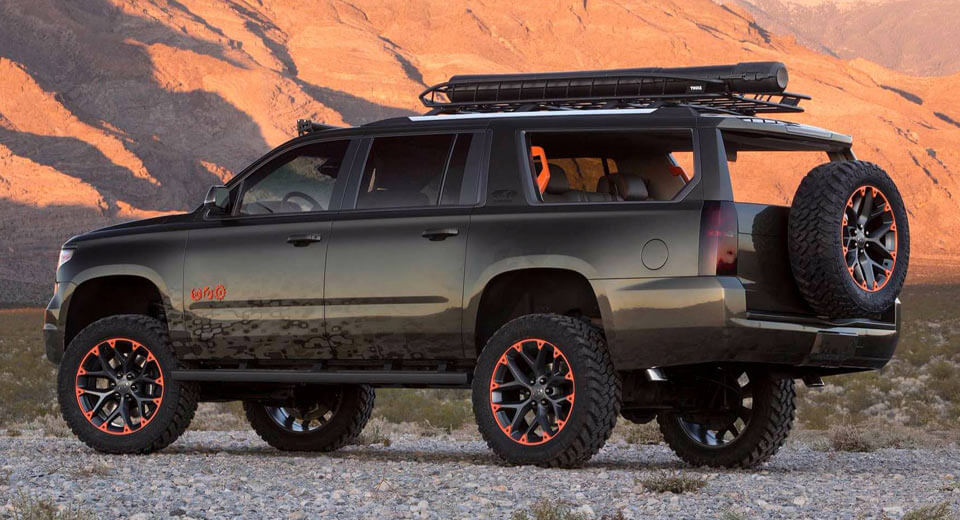 Chevrolet has released a plethora of eye-catching concepts at SEMA, with the 2018 Corvette Carbon 65 Edition also joining the party.

Elsewhere, the automaker has created the Silverado Performance Concept, fitted with a supercharged 5.3-liter V8 engine, a set of large brakes, lowered ride height and some visual modifications.

Joining the Silverado Performance Concept is the Silverado 3500HD NHRA Safety Safari, a six-wheeled behemoth for the drag strip that includes a ‘jaws of life’ device.

Additionally, Chevrolet has partnered with country music singer Luke Bryan for a one-off Suburban. The vehicle receives a custom paint scheme, unique wheels and has been created as the ultimate off-roader for hunting enthusiasts. Consequently, it incorporates a side-opening tailgate and a reversing third-row seat to face the wilderness. Performance modifications include a cold air intake and Chevrolet Performance six-piston front Brembo brakes.

Another curious creation is the Traverse Stand Up Paddle Board Concept. It has a beach-themed paint job, a large Riviera Paddlesurf board fitted to the roof, 20-inch black wheels and a black grille.

As for the aforementioned 2018 Corvette Carbon 65 Edition, it was unveiled earlier this year and celebrates the 65th anniversary of the Corvette.