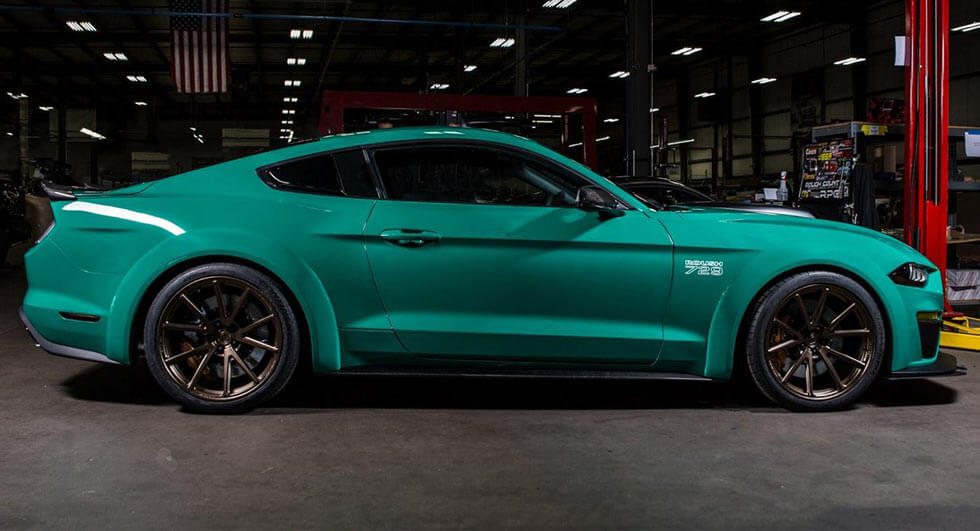 Drawing inspiration from the 1970 Boss 429 Mustang, the 729 Mustang has a custom wide-body kit and a Sherwin-Williams Grabber Green exterior which pays tribute to the classic pony car. The model also features a functional hood scoop and unique fender flares which were 3D printed by Stratasys.

Designers also installed a number of carbon fiber components including a front splitter, side skirts, and a rear spoiler. There are also carbon fiber mirror caps, a revised grille, and a blackout appliqué on the rear of the car. Other notable highlights include an adjustable suspension and custom 20-inch Vossen wheels which backed up by Brembo brakes.

The car's interior has been extensively modified as it features Recaro racing seats, a roll cage, and Katzkin leather upholstery. The rear seats have also been removed and replaced by a carbon fiber module developed by Anderson Composites.

Motivation is provided by a 5.0-liter V8 engine which has been equipped with a cold air intake and the new Roush / Ford Performance supercharger kit. This enables the car to have more than 700 hp (522 kW) and 610 lb-ft (826 Nm) of torque.