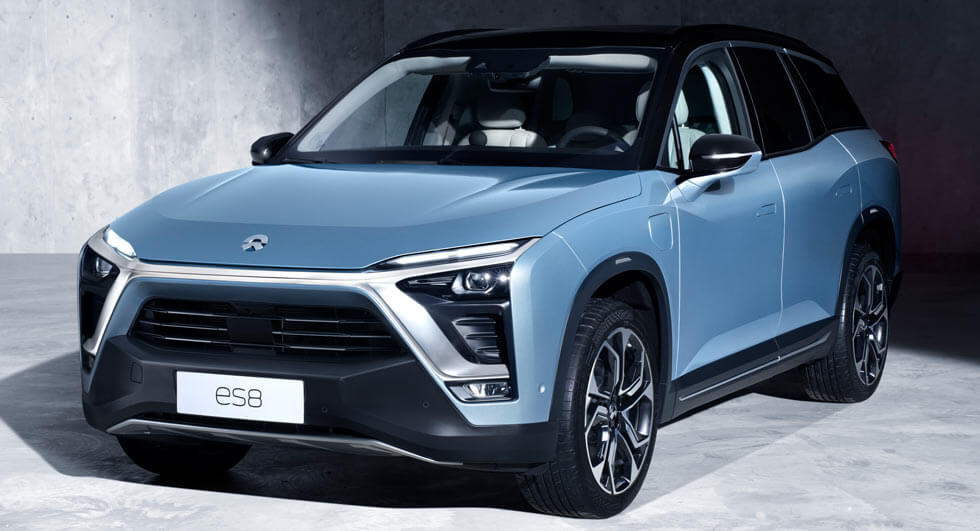 NIO stunned everyone when its EP9 set a Nürburgring lap record earlier this year and now the company is moving onto more traditional fare by detailing its ES8 crossover.

Unveiled earlier this year, the ES8 is a "high performance electric SUV" that features a bold design which will likely provoke strong reactions. While its styling won't win everyone over, NIO says the model has an all-aluminum body and chassis as well as the "highest amount of aluminum for any mass production car."

The seven-seat interior is decidedly more appealing as it features high quality materials and advanced technology. Notable highlights include Nappa leather upholstery, a digital instrument cluster, and a large infotainment system with a portrait orientation. Owners will also find a front "lounge seat" and an air quality system that includes an activated carbon and HEPA filter as well as a negative ion generator.

The ES8 is powered by a 70 kWh battery pack which enables the model to have an NEDC range of 220 miles (355 km). When the battery is depleted, it can be swapped out for a fully recharged battery in approximately three minutes. The company plans to build over 1,100 Power Swap Stations in the future and they will be joined by over 1,200 Power Mobile vehicles which can give the ES8 enough juice to travel up to 100 km (62 miles) after a ten minute charge.

On the technology front, the ES8 will come with NIO Pilot which is described as an advanced driver assistance system. It uses a total of 23 sensors including a trifocal front-facing camera, four exterior cameras, five millimeter-wave radars, a driver monitor camera, and 12 ultrasonic sensors. Thanks to the various cameras and sensors, the crossover has automatic emergency braking, traffic jam assist, and highway pilot. Other features include blind spot detection, traffic sign recognition, and a lane departure warning system.

Besides the high-tech safety features, the ES8 comes equipped with NOMI which is being billed as the "the world's first in-car AI system." NIO says NOMI is a "fun, expressive, and intuitive companion that can listen, talk, and help drivers along the way."