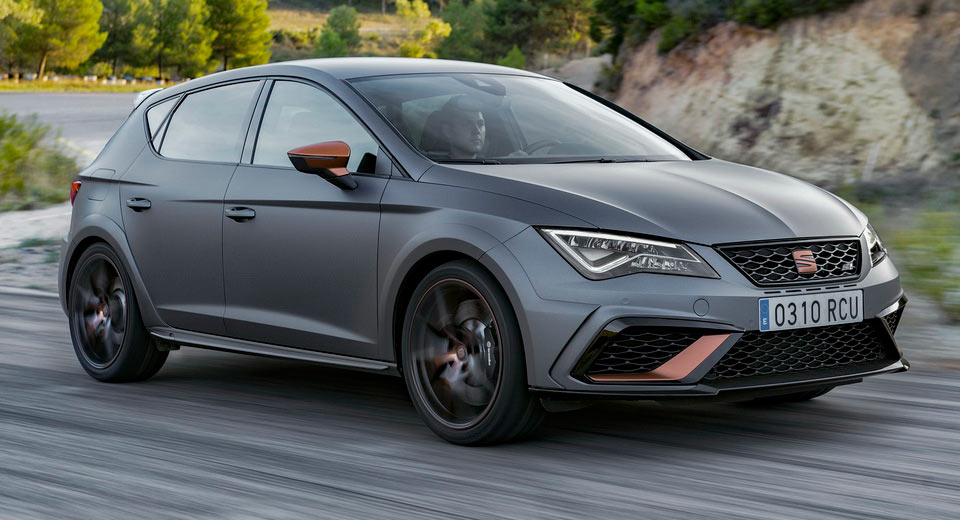 The new Leon Cupra R is the latest, most powerful and exclusive version of Seat’s hot hatch. It’s also the first sign of Seat’s future plans for the Cupra performance sub-brand, with the new Cupra R being not just the most powerful, but also the most hardcore version yet.

Both of them are front-wheel drive only and come fitted with specifically tuned adaptive suspension and an electronically limited slip differential. Other technical differences include wider tracks front and rear (1,593 and 1,530mm, respectively) with modified camber angles, bigger 370mm Brembo brakes, a reprogrammed adaptive steering rack and a retuned exhaust system.

Aside from the obvious fender extensions, the Leon Cupra R can be distinguished by its copper details and the new aero kit, which is made from carbon fiber and includes new front splitter, rear wing, side skirts and the rear diffuser. Seat claims an improvement in aerodynamic efficiency by 12.5 percent compared to the standard Cupra. The interior has also been upgraded with copper details on the dashboard, the console and the air condition trim pieces, Alcantara on the steering wheel and gear lever, as well as copper stitching on the bucket seats.

The first examples of the Leon Cupra R are expected to be delivered at the end of the year.