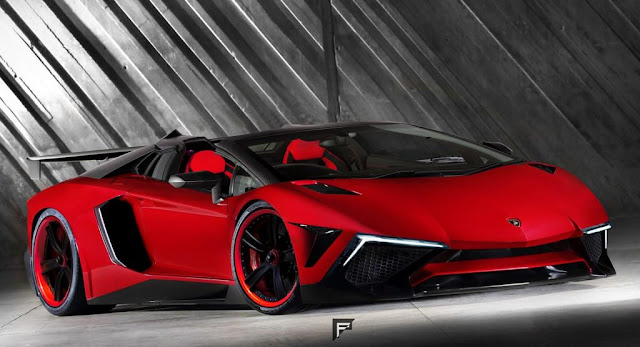 Perhaps one of the best ways to tell if a concept‘s futuristic styling would work in the real world is by using it on a current production model. And that’s exactly what we have here.

Designer Fabio Puddu took a regular Lamborghini Aventador SV and swapped out its front fascia, wheels and rear wing for something a little bit more wild. Rather, make that a lot, because the new styling is influenced by the Terzo Millennio concept.

Lamborghini unveiled the Terzo Millennio last November and it was the result of a three-year, €600,000 partnership between the Italian automaker and the Massachusetts Institute of Technology (MIT).

Let’s face it, the car is a real-life Batmobile as far as its styling is concerned, and to see certain cues end up on the Aventador SV, even if it’s just a rendering, really beefs up what already is a very aggressive supercar.

Gone are the production headlights, replaced by a clean-looking bonnet. Then, Terzo Millennio-like light units are positioned on either side of the front spoiler – just like on the concept, except that without the third light strip that goes upwards towards the cockpit.

Other than that, we see a set of black new wheels a red lip. Last, but not least, there’s a massive rear wing, clearly bigger than the one found on the Aventador SV.
Tags : Concept, Lamborghini, Lamborghini Aventador, Lamborghini Concepts, Renderings,
Share to: