VW Continues To Tease The 2019 Jetta Ahead Of Detroit 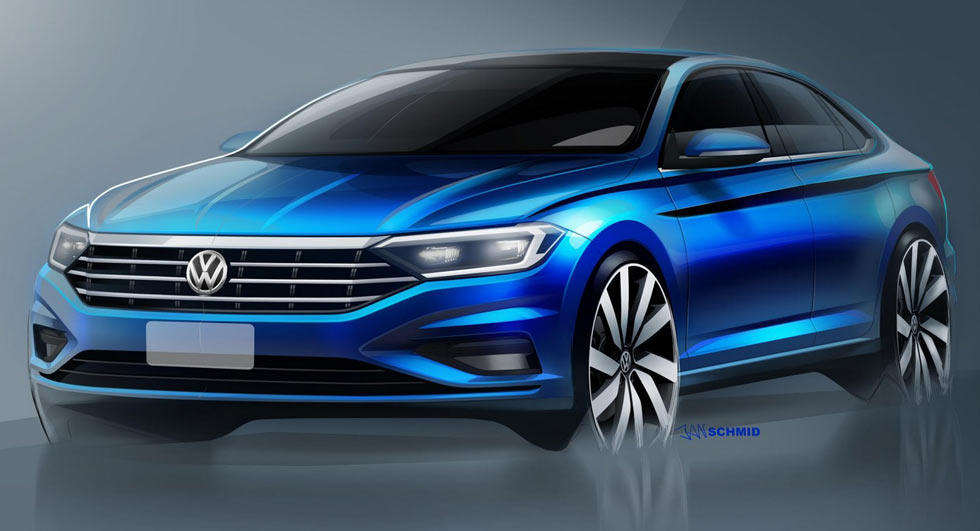 Volkswagen has released a handful of sketches which preview the 2019 Jetta.

Set to debut at the North American International Auto Show next month, the redesigned sedan will adopt a more upscale exterior that is significantly sportier than its predecessor. As the images show, the car will have an all-new front fascia with a larger grille that is flanked by angular headlights.

Moving further back, we can see a sculpted hood and prominent character lines that give the sedan a little more pizzazz. The sketches also suggest the Jetta will have a rakish windscreen, a sportier roofline, and a new trunk with an integrated spoiler. Other notable features slender taillights and dual exhaust system with chrome accents.

The interior follows the latest Volkswagen design trends as its shows a relatively straightforward cabin with familiar controls. The sketch doesn't reveal much but we can see the Jetta will be offered with a digital instrument cluster and a large infotainment display which is neatly integrated into to dashboard. The model also has a three-spoke steering wheel, metallic accents, and what appears to be dark trim.

Volkswagen didn't say much about the model but Car and Driver recently took a spin in a prototype and the magazine is reporting the car the car will go on sale in the second quarter of 2018. The model will ride on the MQB platform and is slated to be approximately two inches longer than its predecessor.

Power will reportedly be provided by a turbocharged 1.4-liter four-cylinder engine that produces 150 hp (111 kW) and 184 lb-ft (249 Nm) of torque. It can be paired to either a six-speed manual or an eight-speed automatic.