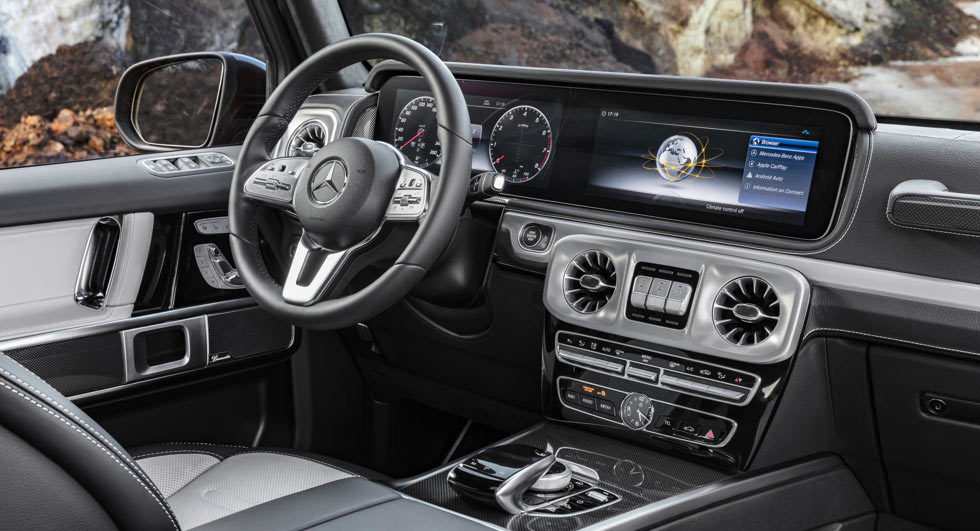 The late night news continues as Mercedes has released the first interior photos of the 2019 G-Class.

Set to be unveiled at the North American International Auto Show next month, the redesigned G-Class will have an all-new cabin which is significantly more modern and luxurious than its predecessor.

Once seated behind the all-new steering wheel, drivers will find themselves surrounded by leather upholstery, open-pore wood trim, and carbon fiber or metal accents. The niceties don't stop there as the model comes equipped with heated seats, a seven-speaker audio system, and numerous new storage compartments including an illuminated area underneath the armrest.

Speaking of options, Mercedes confirmed the G-Class will be offered with a 16-speaker Burmester surround sound system as well as an Active Multicontour Seat package that includes special front seats that feature heating, ventilation, and massage functions. There will also be an assortment of designo options such as Lugano leather in Black, Nut Brown or Macchiato Beige. Other choices include the Exclusive Interior Plus package which adds things such as Nappa leather upholstery on the doors, center console, and dashboard.

Despite embracing newer technology, the interior has some classic design touches including a passenger side grab handle and chrome-accented switches for the differential locks. There are also two removable cup holders for the center console and round air vents that mimic the SUV's round headlights.

The 2019 G-Class is larger than its predecessor and this gives drivers and passengers additional leg, shoulder, and elbow room. The most significant increase goes to rear seat passengers who will find an additional 5.9 inches (150 mm) of legroom.

Mercedes is keeping a lid on exterior photos but the automaker confirmed the G-Class will retain its iconic design which has largely stayed the same for decades. In particular, the company said the model will keeps its distinctive door handles, protection strips, and rear tire carrier.

Following its unveiling Detroit, the G-Class will go on sale in the United States in late 2018.