Roll Like Sonny & Cher In These Custom Classic Mustangs 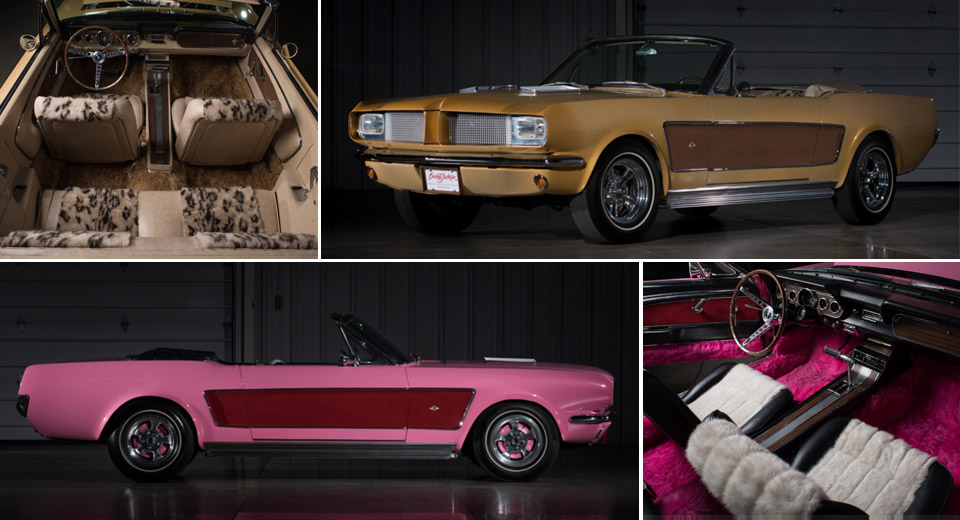 Imagine yourself in 1965. You and your significant other are topping the charts and jet-setting around the world to play in front of crowds of fans. You're so popular that Ford pulls two new Mustang convertibles off the line and has them customized just for you.

That fantasy was the reality for Sonny & Cher, and half a century later, their custom pony cars are coming up for auction.

Created at the dawn of the Mustang's long run, these drop-tops were fitted with 4.7-liter V8s and three-speed automatic transmissions before being modified by the legendary George Barris – the “King of Kustomizers” and Hollywood's favorite car guy.

Both received custom paint jobs – Sonny's in gold, Cher's in pink – each with 40 layers of lacquer... but that was just the start. The grilles were new, the taillights fitted from the Thunderbird, the door handles mounted flush, and the wheel arches flared like their new owner's bell-bottom jeans. Those side panels? Yeah, that's suede – brown on Sonny's, red on Cher's. And that's before we even climb inside.

Barris fitted each individually with antique leather and suede with 3-inch fur carpeting. The seats on Sonny's were upholstered in bobcat fur, Cher's in ermine, with gold and hot pink trim to match their respective exteriors.

For the feint of heart these are not, but they're splendid examples of the pop culture of the time. They'll be sold as a pair, bundled with “an extensive collection of Sonny & Cher memorabilia,” by Barrett-Jackson in Scottsdale this month, where they're sure to make some collector very nostalgic for a bygone era.