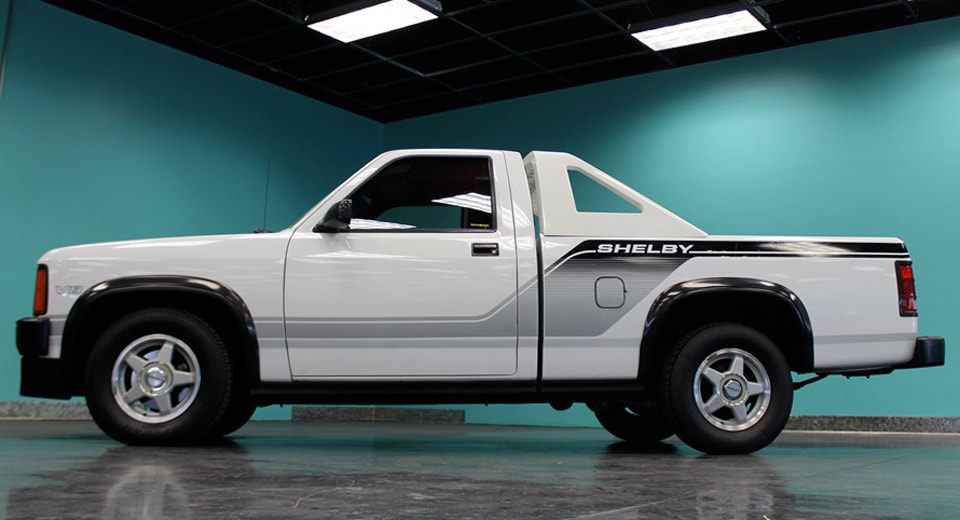 Shelby's known these days mostly for tuning Mustangs. But there was a time in the 1980s when the company was tied closely with Dodge, producing high-performance versions of the Omni, Charger, Lancer, and Dakota – like the one you see here.

Based on Dodge's first-generation mid-size pickup, the 1989 Shelby Dakota was actually the first V8 rear-drive vehicle that Shelby had worked on in decades.

It packed a 5.2-liter V8 driving what would now seem like a paltry 175 horsepower and 270 lb-ft of torque to the rear wheels through a four-speed manual. It was also the first Dakota fitted with a V8, before Dodge offered later versions with its Magnum engine – and set the stage for other factory performance trucks like the 1991 GMC Syclone and '93 Ford F-150 SVT Lightning.

Only 1,475 examples were made in a single year of production, of which 480 are said to have been painted white. This was the the very first, and after initially being sold to a private customer, Shelby American bought it back. And like so many of his products we've seen come up for auction, Carroll Shelby himself was said to have driven it. It even comes documented with an Arizona speeding ticket by his chief executive Donald Rager.

The performance truck is one of the more enticing lots up for sale at Barrett-Jackson in Scottsdale, where it will cross the auction block this coming Friday, January 19, 2018.