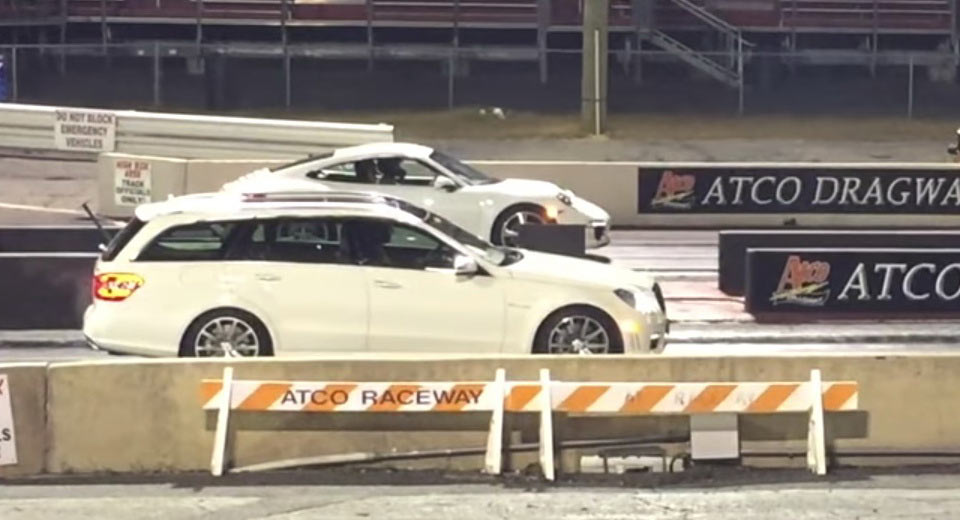 Last August, Doug DeMuro purchased a 2012 Mercedes-Benz E63 AMG for $44,000. The YouTuber claimed that the 520-horsepower (525 PS) wagon would become his daily driver and promised to do all sorts of fun things with the machine.

Well, he's taken a break from reviewing cars, like the Tesla Model 3, which he called the coolest vehicle of 2017, to take his E63 AMG wagon to a drag strip.

DeMuro’s wagon was joined by an Audi R8 and a Porsche 911 at Atco Dragway in Atco, N.J. to see if the E63 AMG could keep up with them. While it certainly isn't a sports car like the other two, the E63 AMG can get to 62 mph in 4.4 seconds, so it had more than a fighting chance against them.

On the other hand, the wagon may have more power than the R8 and the 911, but it’s heavier and compared to the R8’s all-wheel-drive layout and the 911’s rear-engine setup, is down on traction, as well. So, it wasn’t really surprising when (spoiler alert) the Merc lost a quarter-mile drag race against the R8. The times were pretty close though, with the E63 AMG wagon setting a time of 13.293 at 109.12 mph. The R8 was a little quicker, with 13.120 110.23 mph respectively.

DeMuro claimed that the Mercedes was in Eco Mode and in its comfort settings. The second time around, he chose the proper go-fast settings and things turned out better.

We won't get into too many details, as that’s what the video’s for, so if you want to find out whether a super-estate can outrun bona-fide sports cars in a drag race, just click the play button.