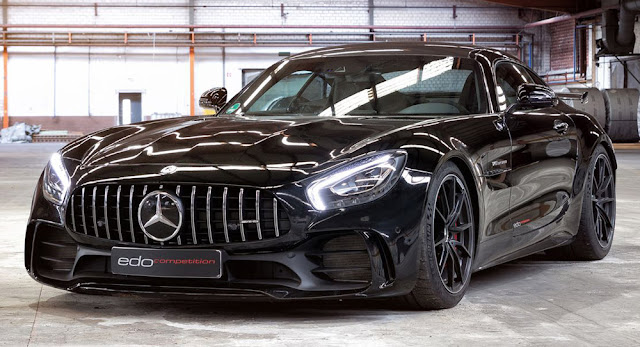 Want to pick yourself up a new Mercedes-AMG GT? Nice choice, friend. Now all you have to do is choose which level of output you want.

There’s the base model with 469 horsepower, the GT S with 515 hp, the GT C with 549 hp, and the top-of-the-line GT R with 577 hp – all of these figures produced by the same 4.0-liter twin-turbo V8 engine and housed in the same essential vehicle. But if none of those are enough for you, Edo Competition may have the answer.

The German tuner is offering an enhanced version of the GT R with 660 hp. That’s more than the GT3 racing model can muster with the 6.2-liter supercharged V8 engine from the previous SLS AMG. Meanwhile, torque has also been increased from 520 lb-ft (705 Nm) to 575 (780 Nm) for extra pull.

Along with the boosted engine, Edo has dropped the suspension by almost an inch up front and 0.78 inches at the back. It also fitted a variable exhaust controller for an even throatier sound.

The net result is meant to push the German sports car into supercar territory, giving it the stance to go with it, and a top speed elevated from 198 miles per hour (318 km/h) to an Autobahn-crunching 211 (340 km/h). The tuner hasn’t said what the power increase will do to the AMG GT’s acceleration, but considering that the GT R will already run to 60 in 3.5 seconds, we’re imagining one heck of a roller-coaster ride.

And that 7:10.92 Nürburgring lap time that Sport Auto posted in the standard GT R could drop down to the low seven-minute range, perhaps even beating that other GT-R in Nismo spec that posted a 7:08.68 lap.
Tags : Edo Competition, Mercedes, Mercedes AMG, Mercedes AMG GT, Tuning,
Share to: