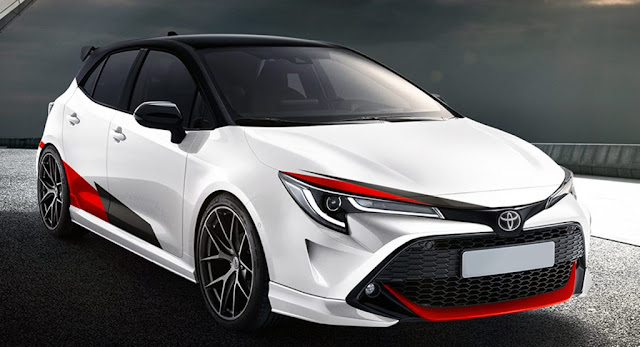 Among automotive enthusiasts, some look at a new car and see what is. Others see what could be. And that often comes down to the prospect of a performance variant of the new set of wheels in front of them.

Take the new Toyota Auris, for example. Like so many new hatchbacks, Toyota’s latest is just begging for the hot-hatch treatment. And that’s just what we have here – albeit in speculative form.

Published by X-Tomi Design is a rendering of what the new Auris could look like were it to be given the GRMN workover like the smaller Yaris has. It’s festooned with a more aggressive aero package, bigger wheels, and special graphics. And we have to say that it rather looks the part.

What would sit underneath it all, of course, we don’t know. This is just a rendering. For what it’s worth, the new Auris revealed in Geneva last week will be offered (in the European market at least) with either a 1.2-liter turbo rated at 114 horsepower, or two hybrid powertrains: a 1.8 good for 120 hp, or a 2.0 with 178.

A full-on performance version would likely need a 2.0-liter turbo four delivering at least 220 hp if it were to take on the Volkswagen Golf GTI – 300 if it were to challenge the Golf R. But we’re just speculating here, as much as the rendering is. We don’t know if the Japanase automaker is actually planning such a model, much less what sort of stats it might boast. But if Toyota’s getting as serious about its GRMN performance line as much as, say, Hyundai is about its N brand, tuning the new Auris would be a good step to take next.
Tags : Gazoo, Renderings, Toyota, Toyota Auris,
Share to: