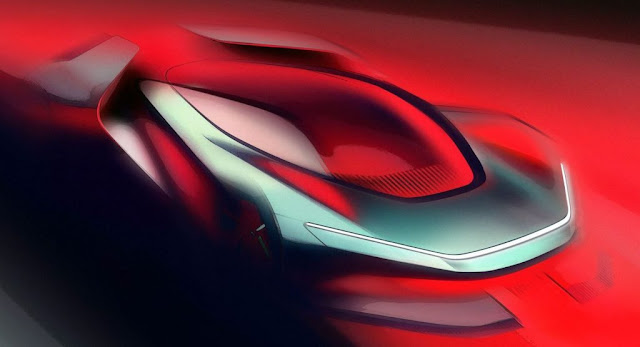 #Pininfarina is getting into the electric vehicle market – not just by designing cars for other marques, but by launching its own. And here we have our first look at what to expect.

Following recent reports, Automobili Pininfarina now confirms that the vehicle will be able to reach 62 miles per hour (100 km/h) from a standstill in under two seconds. It’ll hit 186 mph (300 km/h) in less than twelve. It’ll top out at 250 mph (~400 km/h), and travel for a distance of 310 miles (500 km) between charges. That’ll not only show Tesla a thing or two, but Bugatti and Koenigsegg, too.

To design the new hypercar, Pininfarina has recruited one Luca Borgogno. Not to be confused (should you be so inclined) with the volleyball player of the same name, Borgogno headed up Lamborghini’s design studio in Turin before movinga year and a half ago back to Pininfarina (where he started his career).

Now he’ll serve as design director at Automobili Pininfarina. We’re not quite sure what that means for the automaker’s association with the design house from which parent company Mahindra has spun it off. But you can expect Borgogno to play a key role at the new automaker, alongside CEO Michael Perschke (former director of Audi in India).

“Following a successful launch in Rome, we now face a new 30-month race of our own to deliver our promise and the Pininfarina family’s dream: sustainable luxury, hyper-performance and beautiful electric cars branded Pininfarina,” said Perschke. “Our initial performance targets are aggressive, yes, but our ambition is to set standards in both performance and design: we believe it is what Pininfarina stands for.”

By that timeframe, we can expect to see the PF0 revealed towards the end of 2020. Hopefully we’ll see more of it along the way, with the new brand’s first presence to be felt at Pebble Beach this summer. After the PF0, we can anticipate more EVs to follow, which we’re expecting to include an array of electric crossovers.

The sketches revealed here ostensibly represent Borgogno’s first design for Pininfarina. We can, however, see the design house’s influence in the renderings, particularly around the nose (which looks similar to the Ferrari Sergio‘s). Overall the design looks pretty slick so far, its shape unburdened by the cooling requirements typically placed on the styling of exotics powered by internal-combustion engines. Suffice it to say, we’re looking forward to seeing how it shapes up, so to speak.
Tags : Automobili Pininfarina Previews The Promising New PF0 Electric Hypercar,
Share to: