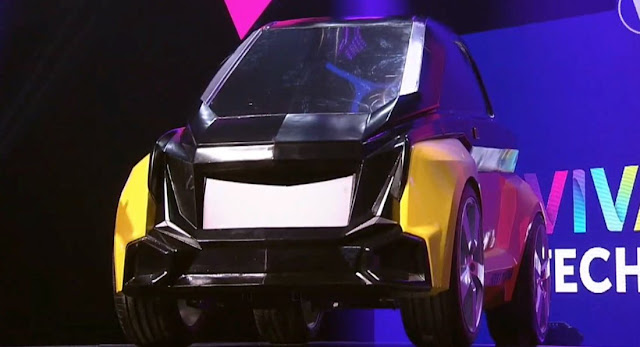 Former Olympic sprinter and the world’s fastest man, Usain Bolt, is venturing into the world of electric vehicles with the Bolt Nano that was revealed at the VivaTech show in Paris, France.

Bolt has been making a name for himself in the electromobility world in recent months with the launch of a trio of all-electric scooters, dubbed the Bolt Original, Bolt One, and Bolt Chariot.

The Jamaican athlete-turned-businessman says that his scooters are perfect for journeys of up to 2 miles (3.2 km) ,while the new Bolt Nano micro city car is best suited for journeys between 2 and 15 miles (3.2 km – 24 km). No technical specifications have been released yet, but the Nano does feature a swappable battery pack.

Much like the Renault Twizy, the Nano has been designed to seat two in tandem and it is so small that four of them can fit into a conventionally-sized parking space.

Bolt believes the Nano could be particularly useful in ride-sharing programs. Much like e-scooter and bicycle-sharing programs available around the world, users could park and leave a Nano wherever they want. Staff could then drive around and replace the Nano’s batteries, ensuring that they are fully charged for the next user. A series of charging stations will also be built for the Nano where it can be charged and docked.

“Bolt has conducted extensive research within urban areas and is prepared to revolutionize transportation. We believe that we can provide a scooter that will aid in alleviating transit issues including traffic congestion with little to no impact on pedestrian comfort,” the Bolt website reads.

It remains to be seen when production of the Nano will commence, and where it will be built, but we know it will start at $9,999, with pre-orders now open.
Tags : Electric Vehicles, New Cars, Tech,
Share to: